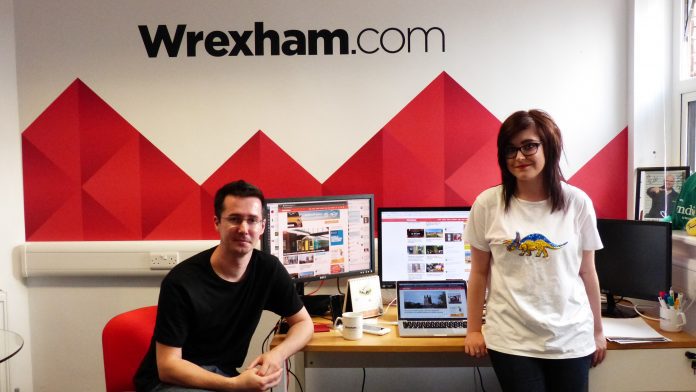 We’ve all visited their web site, facebook page, seen their tweets and read their forum posts so just what is it about Wrexham.com that makes it such a local phenomenon?

We went to visit Wrexham.com at their Regent Street base to find out how they manage to maintain their popularity and how do they keep up to date with all that’s going on in Wrexham with just two members of staff – Rob Taylor and Darryl Robertson.

Wrexham.com was Rob’s baby which he launched in 2012 and he hasn’t looked back since. It was one of the first of its kind but now there are similar local websites representing individual towns and cities all over the UK.

Darryl joined Rob in 2013 after she finished her English degree followed by a degree in journalism. Which, Rob acknowledges, “is when our readership began to take off.”

As of one week ago they had reached the eye watering 50 million page reads – the sort of figures we at news.wrexham.gov.uk only dream of! You can only maintain that sort of following by being interesting, relevant and of course having up to date new and Wrexham.com get this right every time. 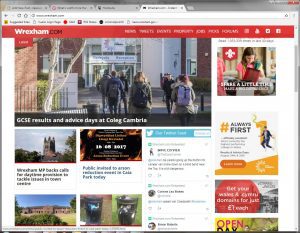 An example of spotting what’s important to people was clearly seen during the recent local elections. Wrexham.com wrote to every candidate and asked them to go online and complete a questionnaire about themselves, where they stood on certain issues and how they would represent their wards if elected. The majority responded with those that didn’t coming under some criticism from the public. The profiles were so popular that 200,000 page views were logged. For the first time in Wrexham, and probably anywhere else in the UK, the electorate had more knowledge about the candidates than at any previous time.

“People really do care about Wrexham, what happens here and what’s going on. That’s really good to know and makes all the hard work worthwhile. I’d like to thank everyone for supporting us so much and we will continue working hard to make sure that what’s happening in Wrexham is reported fairly and accurately.”

Maintaining such high standards and meeting increased expectations isn’t easy and Rob tells us that Wrexham.com is manned up to 17 hours a day.  That’s a tough ask between two people but one which they’re both committed to maintaining.

Rob mentioned that he was hoping to employ another member of staff in the near future which would be funded through increased advertising.

So that’s it.  Wrexham.com is now a household name and one which is certainly here to stay.

“I don’t know anyone who doesn’t know of Wrexham.com and, whether you agree with them or not, they always add to the debate or conversation.  They’re an excellent example of a local business, run by local people, that is bringing an excellent service to the people of Wrexham.  Good luck with your plans to expand and I look forward to reading more of what’s going on in Wrexham on Wrexham.com.”