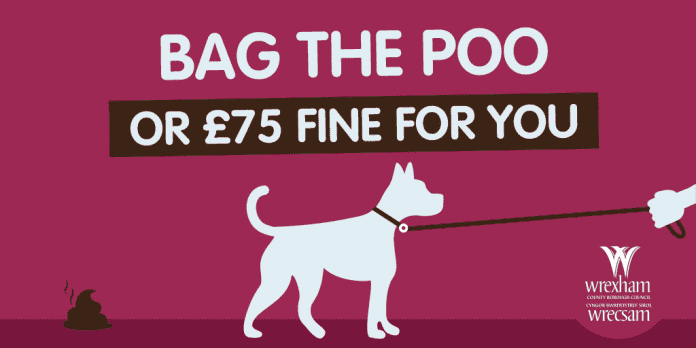 We are a nation of dog lovers and the majority of us care for our dogs very well particularly when it comes to regular exercise. Unfortunately not all dog lovers in Wrexham are keen to pick up the poo after their dog has fouled and they leave it where it is. This can be hazardous to others, particularly if stepped in, it also isn’t pleasant to see in our country parks and on the pavements.

Not picking up the poo is an offence and which could be met with a £75 fine if offenders are caught and we’re about to clampdown on offenders. Enforcement officers will be paying particular attention to dog fouling in the coming weeks and will not hesitate to hand out a fine to offenders.

We’re now asking you to report instances of dog fouling so we can target hot spot areas. Please report offences via email to contact-us@wrexham.gov.uk, online at http://www.wrexham.gov.uk/english/online/index.htm or by telephone 01978 298989.

Cllr David A Bithell, Lead Member Environment and Transport said, “I have received lots of complaints recently and it’s clear that people are fed up of those dog owners who refuse to pick up after their dog has fouled. I’m asking officers to pay this offence particular attention over the next few weeks and those who currently aren’t picking up should think seriously about their disregard for their environment and fellow dog owners and avoid a £75 fine. Responsible dog owners will have nothing to fear from this clampdown”