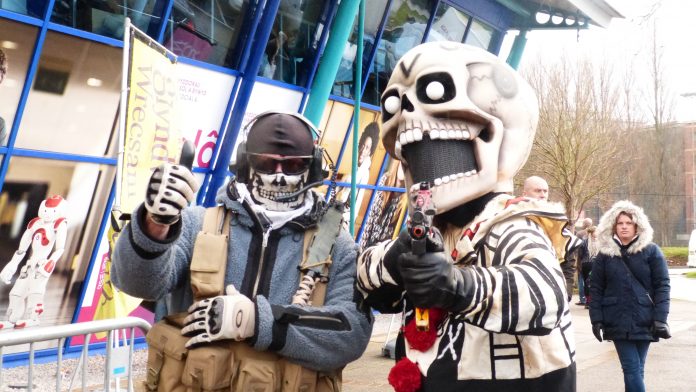 Wrexham is bracing itself for the return of Comic Con next weekend when heroes from across the universe will once again descend on Glyndwr for the 10th Wales Comic Con.

The event, one of the most popular on the Comic Con calendar in the UK and across Europe, will see thousands descend into the town centre many of whom will have spent the weekend here bringing valuable tourism to Wrexham and the wider regional area.

This month’s guests are guaranteed to please visitors with Val Kilmer headlining, famous for his Batman role but many of us fondly remember his Doc Holliday in Tombstone and Ice Man in Top Gun!

He’ll be joined by Sean Astin, remembered for his role as Samwise Gamgee in the Lord of the Rings trilogy and of course the Goonies. Greg Grunberg will be popular among Heroes fans and of Star Wars, the Force Awakens and Mark Sheppard, a familiar face to many of us for his roles in Supernatural, Battle star Galactica, Firefly, Leverage, Doctor Who, In the Name of the Father and many more.

Alongside the heroes there’ll be exhibitions, question and answer sessions, photo ops and autographs, cosplay and gaming.

As you can see in the video above and the photos below, the event appeals visitors of all ages who dress up as their favourite characters. Some will have travelled from across the UK, others from Europe.

It is estimated the last Comic Con in November brought 10,000 visitors and who will spend around £1,000,000 in the region before returning home.

Cllr Terry Evans, Lead member for Economic Development and Regeneration, said: “There can be no doubt Comic Con is one of the leading events in the area’s calendar and brings with it the exceptional economic benefits to the area. The organisers should be especially proud that their event is held in such high esteem by visitors, guests and exhibitors alike.”