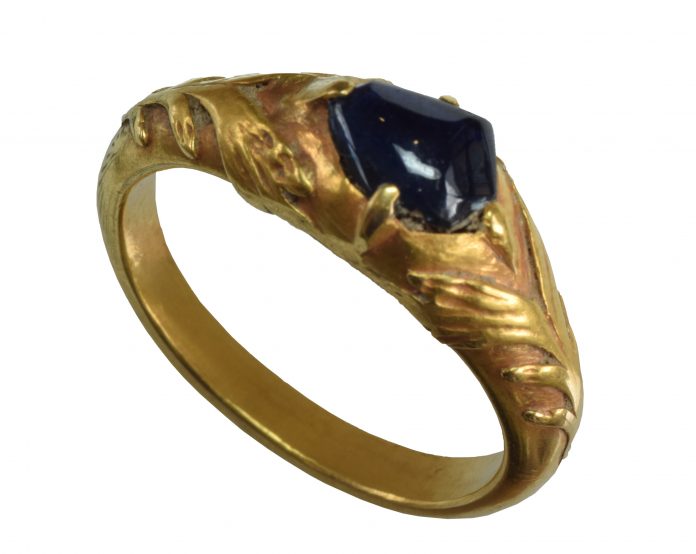 The Bronington Hoard, the medieval treasures named after the area they were found in, has gone on permanent display at Wrexham County Borough Museum.

Buried sometime after 1465 the hoard consists of 52 coins and a magnificent sapphire ring. It was discovered by a local metal detecting club between 2013 and 2017 near Whitewell, Bronington.

The coins date from the reign of Edward I through to Edward IV and consist of 4 gold nobles, silver groats, half groats and silver pennies. The gold ring contains a deep blue sapphire, worn perhaps to expel evil. This is the first hoard of its kind to have been discovered in the Wrexham area.

“Buried in the Borderlands”

The Museum has worked alongside the local community as part of its ‘Buried in the Borderlands’ project, and local people were shown parts of the hoard at various locations including Penley Rainbow Centre in November last year.

Councillor Hugh Jones, Lead Member for Communities, Partnerships, Public Protection and Community Safety, said “We are very grateful to the Saving Treasure Telling Stories project for supporting this fantastically worthwhile project, there is little chance that the museum would have been able to acquire such a valuable discovery without the financial support provided by the scheme. It also allowed a large number of people to be involved with our medieval heritage through an amazing variety of different ways from poetry to costume. All in all I’m sure it has been a worthwhile experience for all concerned.’