Wrexham Mayor Cllr Brian Cameron recently visited Rachel Prince, owner of Snip ‘N’ Tuck based in the General Market to offer his congratulations on reaching the 20 years in business.


Prior to setting up the business Rachel studied theatre costume interpretation and worked in the West End, on touring shows as well as working more locally at Theatre Clwyd. Rachel also worked on the TV soap Brookside.

After setting up Snip ‘N’ Tuck one of the first jobs Rachel was tasked with was repairing the lining for a moses basket. Rachael has also seen generations of the same family return to her after one member of the family was so impressed with her work she insisted “you’ll never be without work.” 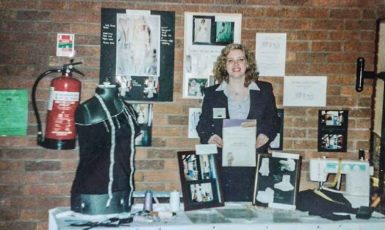 Rachel mends, adapts and produces anything ranging from wedding and prom dresses to military and police uniforms, but says that one of the only things she won’t do is sew the ‘sewing badge’ on Scouts uniforms!

On visiting Wrexham Mayor Cllr Brian Cameron said: “It’s a pleasure to visit Snip ‘N’ Tuck to congratulate Rachel on behalf of Wrexham County Borough Council on their 20 year anniversary. Rachel has done a great job and has been through some tough times, but it’s great to visit and see the business thriving.