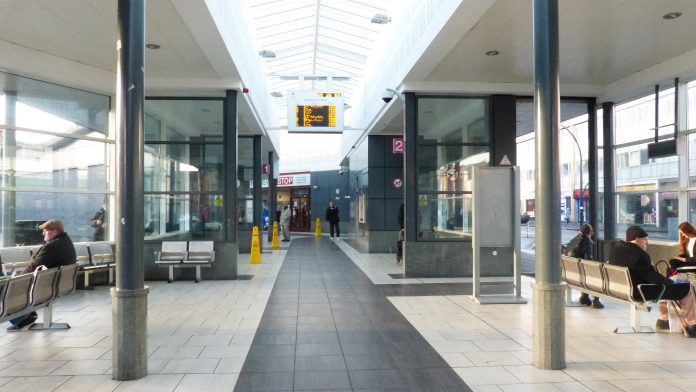 We know how important Wrexham Bus Station is to the image of Wrexham as a town.

As well as being a key part of transport routes across North Wales, the bus station is also the first image of Wrexham that many people will have when travelling to the town.

Recent years have seen us and partners – including North Wales Police – spend large amounts of time improving the environment around the bus station, with the goal of improving the experience of bus station users and the general public.

Users of the bus station will have already seen some improvement works taking place in the bus station over the last couple of weeks including pest control measures, LED lighting upgrades, painting of the concourse area and upgrades to existing electronic information boards.

These works have been afforded through a successful £73,000 grant funding application by Wrexham Council to the Welsh Government, who recognise the importance of the bus station as an important local/regional transport interchange and gateway to the town centre.

The works taking place form part of a wider programme of works to improve the passenger experience at the bus station with further planned investment later in the year, including CCTV upgrades, improved seating, non-slip flooring, refurbishment of existing toilets and information office, cycle storage facilities and rebranding of the bus station.

And the really good news is that the work will include the re-opening and staffing of the Information Office at the Bus Station.

The office will be open from Monday to Saturday, and members of staff will be able to provide information on public transport services; arrivals and departures to the station and directing the public to other council services in the town centre.

Members of the Council’s Executive Board will discuss plans for the Bus Station at their monthly meeting on Tuesday, February 13.

Members will also discuss proposed increases to departure charges and lay-over charges for transport providers at the Bus Station.

You’ll be able to follow the webcast live here.

Cllr David A Bithell, Lead Member for Environment and Transport, said: “We know the Bus Station is an incredibly important part of the Town Centre, and I’m very pleased to be able to announce the new contract which will see the Information Office re-opened and staffed

“We know that’s been a focal point of interest for Bus Station users for some time, and staff will be on hand to provide key information on bus and other transport services.

“The council’s Administration is keen to improve the town centre, and the bus station is one of the key parts to improving the area and encouraging more people into Wrexham Town Centre.

“I look forward to presenting this report to the Executive Board.”