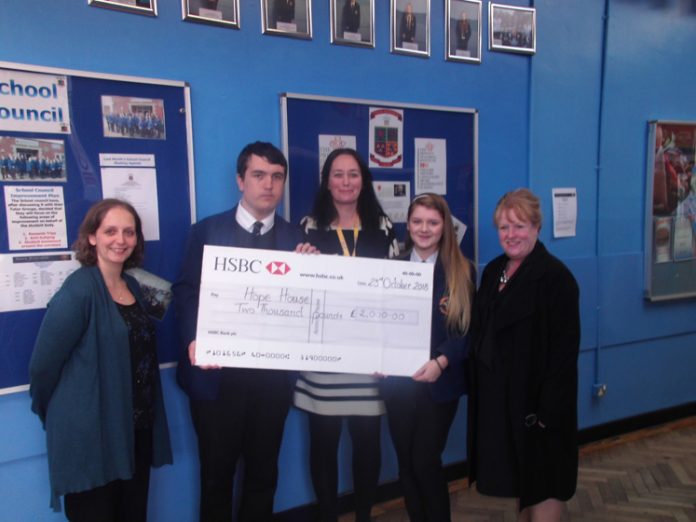 Over the last twelve months, Ysgol Rhiwabon students have organised and participated in a series of fundraising activities in aid of Hope House Hospice, as one of their chosen charities.

Using their creativity and entrepreneurial skills from the Skills Challenge Certificate (part of the Welsh Baccalaureate qualification), students ran the annual Christmas Fair, offering presents, decorations and treats to students, staff and visitors from the local community.

Highlights included homemade cakes, original games and knitted products, all created by the students themselves.

Throughout the year, non uniform days, cake sales and other events, were held to swell the charity fund.

On Tuesday October 23rd, Cat Dowdeswell visited the school to introduce the challenge to the current Year 10 students, in preparation for their fair to be held this coming December.

After highlighting the great work done for local families in the community, Cat was presented with a cheque for £2000 by Joe Richards and Laigha Parry, members of two of the most successful stalls at the fair.

Miss S Bourhill, Welsh Baccalaureate Co-ordinator said, “I was delighted for our students to be able raise such a sum for Hope House. It is a tremendous effort and all credit should be given to the students for the dedication they have shown for this worthy cause”.