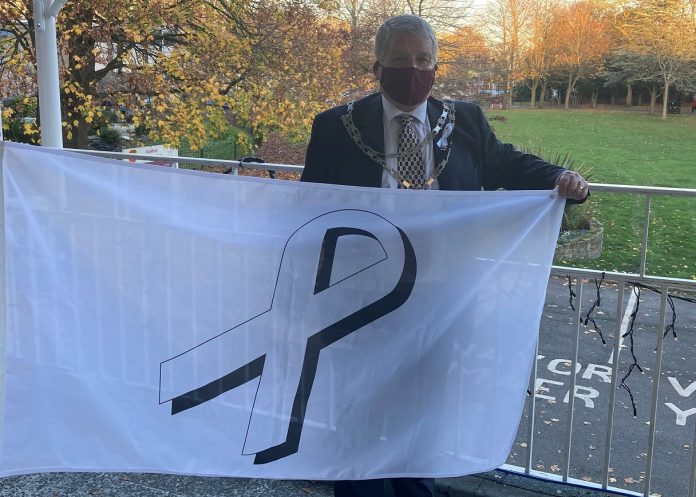 The Deputy Mayor, Cllr Brian Cameron, has joined with men and women across Wrexham and Wales in actively supporting the White Ribbon Campaign for 2021.

He took charge of the official White Ribbon Flag earlier today which will be raised and flown over the Guildhall for 16 days from the start of the campaign on Thursday, November 25, 2021. The balcony will also be lit up with a white light for the campaign.

The campaign is committed to ending violence against women.

The Deputy Mayor said, “Since the shocking murder of Sarah Everard earlier in the year there’s been a lot of men making a stand against violence against women and I’m proud to be joining them.

“I’ll be wearing the white ribbon throughout the campaign, especially when undertaking my duties and I won’t hesitate to encourage everyone I meet to make the promise to never commit, excuse or remain silent about violence against women.”

“Please join me for the next few weeks in wearing the White Ribbon and take action to ensure that #AllMenCan play a part to ending violence against women.”

Light Up Vigil on Llwyn Isaf

Members of the public are invited to attend the Light Up Vigil on Thursday evening at 7pm at Llwyn Isaf and wear a white ribbon and use the lights on your mobile phone or a torch to show your support to end violence against women and domestic abuse, for good.

You can read more about this here.