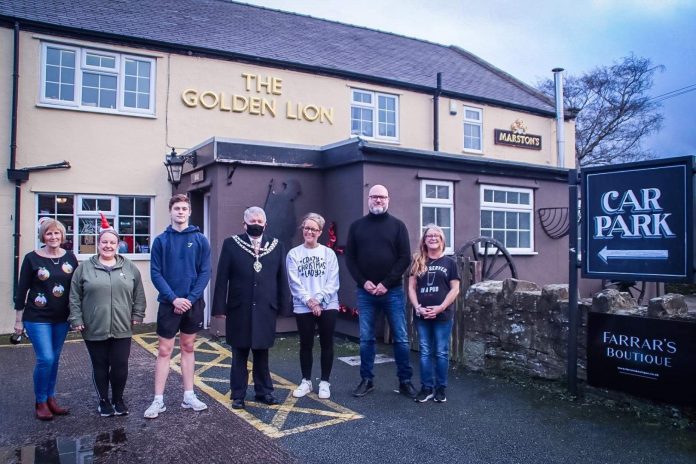 A local community pub opened its doors to all those in search of some extra festive cheer.

The Golden Lion, Coedpoeth, recently held a Christmas Fayre at the pub, which also boasts its very own boutique shopping experience. Deputy Mayor, Councillor Brian Cameron, dropped by to join in with the seasonal festivities.

The pub was brimming with stalls boasting some of the finest local and handmade items for sale. There was gifts and treats for everyone on offer, from homemade cakes to photography prints from the areas most talented prodigies.

Amongst the tinsel and delights, raffle tickets were snapped up in aid of fantastic causes such as Alzheimer’s UK and the Poppy Appeal.

Putting a shift in

Whilst browsing the stalls and meeting the local traders and regulars of the Golden Lion, the Deputy Mayor was invited to try his hand at a rather different career than he’s been used to.

Rolling up his sleeves, he stepped behind the bar to serve a thirsty customer with a refreshing cold one to quench their thirst.

Overseeing his progress, landlady Sian Jones said: “He’s not too bad for a new starter but we’ve got a long way to go before he can be a manager!”

A Christmas song and dance

As visitors to the fayre warmed up with some mulled wine, they were treated to some musical performances. The Iftons Colliery Band gave stirring renditions of traditional favourites and the Golden Lion Community Choir serenaded everyone with familiar yuletide standards.

The feeling of good will was very infectious and helped all in attendance ring in the Christmas cheer.

The Deputy Mayor said: “I had a marvellous time visiting the Christmas Fayre in the Golden Lion. What stood out to me was the closeness of the community working together.

“It was not only enjoyable to be there but to also feel the community spirit in the air. I want to thank all involved for their hard work in making such a special day and for having me join you all.”