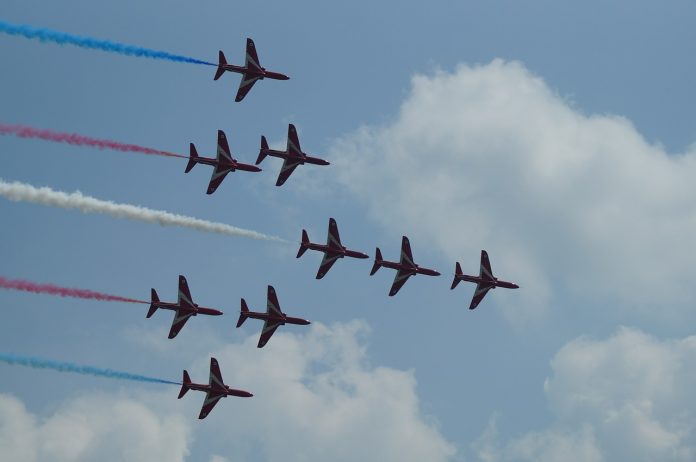 This year sees the 100th anniversary of the Royal Air Force – the world’s first independent Air Force – and we’re looking to mark this with a civic honour for RAF Wales.

If the plans are given the thumbs by councillors at their meeting on the 23 May the Civic Honour will be celebrated with an event to be held either in August or September.

No details of the event are given in the report but we’d expect to see a march and assembly on Llwyn Isaf if previous honours are anything to go by.

Councillor David Griffiths, Armed Forces Champion, commented: “I am very hopeful the plans will be given the go ahead and that work on the details of the event to mark the occasion would be available soon after.”

Why are we doing this?

We’re doing this because we want to recognise the many men and women from the county borough who have served in the RAF since its creation and because of the historical links to the area.

The David Lord VC, DFC, whose bravery in ensuring supplies were dropped over Arnhem whilst his plane was damaged and burning is recognised by a Memorial situated at the Memorial Hall in the town centre. There’s also a plaque to commemorate the involvement of Air Chief Marshall Sir Frederick Rosier, RCB, CBE, DSO, in the Battle of Britain at the Grove Park Campus of Coleg Cambria.

Has the RAF ever been stationed in Wrexham?

Yes it has – during 1917-20 there was an RAF station at Borras and the area is known to this day as “Borras Airfield”. It was used by Numbers 4 and 52 Training Squadron Schools of the Royal Flying Corps and after 1918 by RAF training squadrons based at RAF Shotsick.

When the Second World War broke out Wrexham had 3 grass runways, each some 600 yards long which was used as a relief landing strip, with visits from several training squadrons such as Spitfires from nearby RAF Ternhill. It was then upgraded and concrete runways and lighting was installed. In 1941 Number 96 Squadron arrived in Wrexham with Hawker Hurricanes and Boulton Paul Defiant aircraft.

Between 1941 and 1944 Number 285 Squadron were based in Wrexham for training exercises and it was also used by the US Army to support their units close by.

It was fairly quiet until 1962 – 92 when a hardened nuclear bunker was built on site for Number 17 Group Royal Observer corps North Wales – they were responsible for providing a 4 minute warning alarm to locals during the Cold War. It’s still on site but is now used as a recording studio.