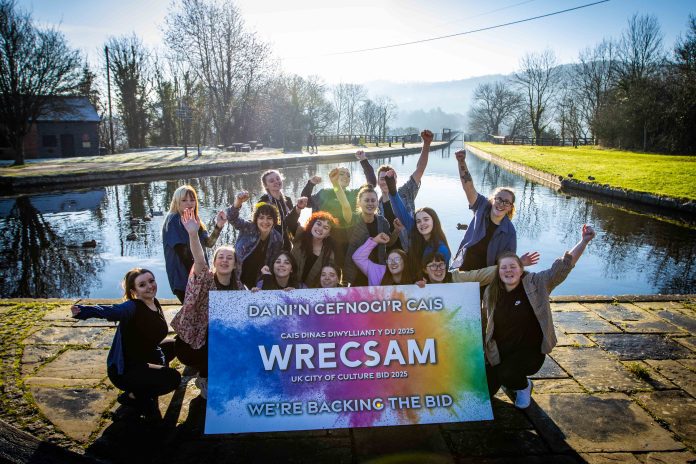 We’re delighted to have made it onto the shortlist to become UK City of Culture in 2025!

DCMS (the Department for Digital, Culture, Media and Sport) who run the competition have announced that Wrexham have made it onto the shortlist alongside Bradford, County Durham and Southampton.

Welsh Secretary Simon Hart said: “I am absolutely delighted to see Wrexham on the shortlist for UK City of Culture 2025. The bid has done a brilliant job flying the flag for Wales and reaching the final four against such high-standard competition.

“Wrexham already has much to be proud of – one of the oldest football clubs in the world in Wrexham FC, the UNESCO World Heritage Pontcysyllte Aqueduct and an award-winning culture and arts hub in Tŷ Pawb. If the county is successful the UK City of Culture title will bring huge opportunities and I wish them every success.”

Arts Minister Lord Parkinson of Whitley Bay said: “I’m delighted that Wrexham County Borough is on the shortlist for UK City of Culture 2025. This has been a tough competition with a record 20 initial applications and eight outstanding longlist candidates, so this accolade is a real tribute to the quality of creativity on display in the region. I look forward to seeing what Wrexham County Borough’s bid has in store next!”

Joanna Swash, CEO of Moneypenny and chair of the City of Culture steering Group said: “This is fantastic news for Wrexham. “We’ve seen so many business and community organisations both locally and nationally show their support for our bid. “At Moneypenny we are extremely proud of our strong roots and there really is so much potential and a huge appetite to see Wrexham become UK City of Culture in 2025.”

Amanda Davies, lead for the Wrecsam City of Culture bid team said: “Our City of Culture team have been working tirelessly behind the scenes to get us to this position, but it’s the Wrexham community involvement and engagement that’s going to get us over the line and win this competition. “Over the next few months we’ve got lots of community run events promoting the bid so keep an eye out on your socials for details, and get in touch if you would like more information on supporting the bid”

Ian Bancroft, Chief Executive of Wrexham Council, said: “It’s heart-warming to see how our community has really come together in support of this bid. Becoming UK City of Culture in 2025 will give us so much scope to develop and enhance Wrexham in what we have to offer to our residents and visitors.

As part of the bid process we have funded over 50 events and activities. Some of these events have already taken place and others are running up to the end of May. So make sure you keep an eye on socials and the #Wrecsam2025 #tag for more details.

At some point in early May we will be visited by a panel of City of Culture judges who will be comparing us to the other regions shortlisted prior to making a decision on who will host in 2025.

We are continuing to bang the drum for Wrexham and continue with the momentum. Keep talking to your friends, colleagues and family about the bid!

The overall winner will be announced towards the end of May.