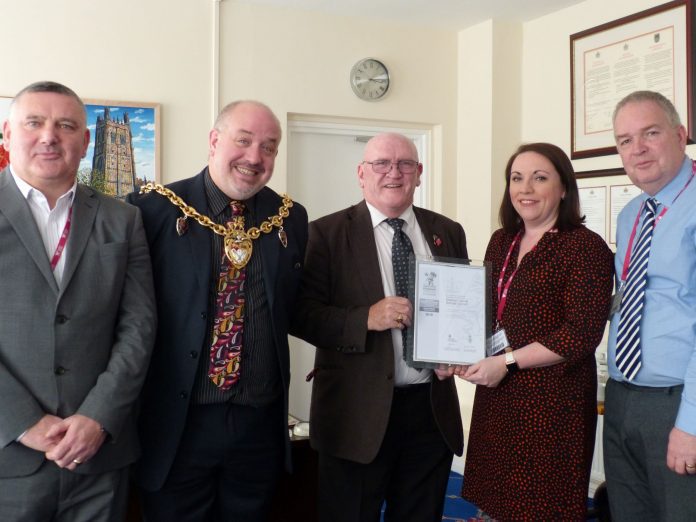 In April 2013 we, along with the armed forces and our partner organisations, signed the Armed Forces Covenant. That was the beginning of a journey that we are still on to ensure that members of the armed forces who return to civilian life in Wrexham are not disadvantaged because of their service to their country.

This work undertaken since 2013 has seen us take a look at our policies in our service areas such as housing to check former service personnel aren’t losing out by them. We’ve also successfully applied for funding to further our work and we’ve even seen housing projects undertaken for those servicemen needing extra help due to health matters brought on as a result of their service.

More recently we’ve taken a look at our own recruitment and employment policies to ensure they support the armed forces community in line with the Armed Forces Covenant and as a result of this work we have been awarded a silver award in the Defence Employer Recognition Scheme. The award highlights that we are a forces friendly employer and proactively support the local armed forces community through our recruitment processes.

The Mayor said: “I am very pleased that we have been awarded the silver award in the Defence Employer Recognition Scheme. We have demonstrated that we are pro-actively supporting the local armed forces community through our recruitment process. We are very proud of this award and what it means to Wrexham, having such a proud military history. A big thank you goes to our staff, past and present, who have been instrumental instrumental in reaching this standard.

A Civic Pride Award is awarded by the Mayor to anyone in the county borough who has made a significant and meaningful contribution to the community and has brought civic pride to Wrexham. They will have been recognised nationally by means of an award, trophy or certificate which will then be formally celebrated at Full Council.

In order to achieve the Silver Defence Employer Recognition organisations should have achieved the following:

• Organisations must have signed the AFC.

• The employer must have already stated their intent to be supportive by using the ERS website to register at the Bronze Level.

• The employer must proactively demonstrate that Service personnel/Armed Forces community are not unfairly disadvantaged as part of their recruiting and selection processes.

• The employer must actively ensure that their workforce is aware of their positive policies towards Defence People issues (eg. an internally publicised and positive HR policy on Reserves, or, in the case where no HR policy exists, support should be demonstrated by specific references in job descriptions or on the organisation’s website).

• Within the context of Reserves the employer must have demonstrated support to mobilisations or have a framework in place.

• The employer must demonstrate support to training by providing at least 5 days’ additional leave.

• The employer must not have been the subject of any negative PR or media activity that could cause embarrassment to Defence.