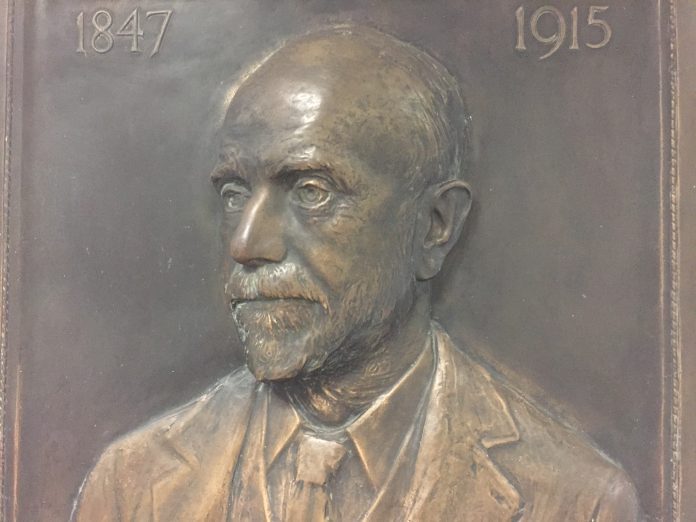 If you’ve lived around these parts for a while, you may remember the bronze plaque that was displayed in the foyer in Wrexham Library for many years.

Originally, it was erected in 1922 in the old library before moving across to our current library.

Now you will find it in the Wrexham Museum archives search room, where it has pride of place on the back wall…

Well, it’s to celebrate the life and works of a certain A.N. Palmer, not to be confused with a Mr Arnold Palmer.

As Jonathon Gammond, Interpretation and Access Officer at Wrexham Museum explains, this has happened a few times:

“He has been confused with the famous golfer, Arnold Palmer, on the more than one occasion with people asking what the connection is between the aforementioned and Wrexham.”

So if he’s not a famous golfer, who was A.N. Palmer and what exactly did he do to get recognised with this plaque?

Here’s a bit of background to A.N., Alfred or Alf to his mates…

Alfred Neobard Palmer was born in Norfolk on July 10, 1847. Apprenticed to a pharmacist in Bury St. Edmunds, he won the Bell Scholarship of the Pharmaceutical Society.

He was then employed as a chemist and moved around to London, then Manchester, before being appointed chemist at a mineral water works in Pentre Felin, Wrexham in 1880.

He went on to set up his own practice at his home before opening an office at 34a Chester Street. This didn’t prove as successful as he had hoped it to be.

Plus…he was said to have “less time for people than he would admit to their face”. His introverted nature and some financial constraints meant he no-longer wanted to have his own practice.

This led to him finding employment as an industrial chemist at Brymbo Steel Works and then he later spent 13 years as an analytical chemist at the Cambrian Leather Works.

But why he has been honoured in bronze isn’t down to his chemistry work…it’s his historical knowledge and love of Wrexham that has left a lasting legacy.

So why go to history from chemistry?

Palmer was said to be “a strange man, whose mind was constantly searching and thinking things over.” This restlessness and a natural instinct to explore meant his desire to find out more about the place he was living in wasn’t so unusual.

His need to find the truth lead him to write several books about the local area…with a thoroughness, like never seen before!

How many books did he write?

He scribed 10 books in total, the first of which was ‘The town, fields and folk of Wrexham in the time of James the First.’

The book wasn’t successful and in truth left him out of pocket, as did many of his books. It was his love of what he was doing which led him to pen the others, including ‘History of the Parish Church of Wrexham.’

To hone his craft, he walked endless miles and worked incredibly long hours. He studied ancient deeds, wills, parish registers and manuscripts to ensure his works were always remarkably thorough.

It took its toll…

It’s fair to say that every book he wrote impacted on his health. He was left drained by the hours he was dedicating and he was also struggling financially.

At one stage he even wrote a novel – ‘Owen Tanat’- as he hoped that this more lucrative market would help cover the costs of his other works. Sadly, the novel flopped.

Palmer’s loyal friend, Edward Owen decided to take matters into his own hands and secured him a pension on the Civil Lists for his efforts.

Wanting the best for Wrexham

In 1892 Alfred Palmer started his campaign for Wrexham to have its own museum. He didn’t ask for too much… he wrote to the Free Library Committee to ask them to place a display case in the library as the first step to establishing a museum.

Eight years later he was still lobbying the librarians and an article appeared in the Wrexham Advertiser describing Mr Palmer as “the driving force behind the idea of setting up a museum.”

It took another 80 years for Wrexham to consider having a museum …more than another decade to find a building…then finally in 1996, 104 years after Alfred launched his campaign, Wrexham Museum opened on Regent Street.

Until Palmer there was very little written down about our local history. Palmer worked frantically to find his information…at a time when there was no Welsh University, no National Library and no County Record Offices.

In todays age, we can really appreciate the great efforts he went to produce his books.

It seems a real shame that Palmer really wasn’t appreciated in his lifetime. As his friend Edward Owen put it “the man who was unquestionably the foremost historical scholar in Wales of his day went down to his grave disregarded.”

In 1915, the University of Liverpool awarded him an honorary degree, but he died on March 6, before he could receive it.

It’s rather fitting that he’s now celebrated in the museum he so long campaigned for. Today, amazing artefacts such as Bronington Hoard and the Bronze Age Rossett lock rings are no longer lost, but are displayed locally for everyone to enjoy…just as Alfred would have wished.

So the next time you’re listing famous Wrexhamites, don’t forget to include a certain Alfred Neobard Palmer!

All this information was taken from books and articles in the Wrexham Museum archives search room. It’s a great place to visit if you want to explore our local history.

Go over and take a gander, there’s always someone on hand to point you in the right direction.