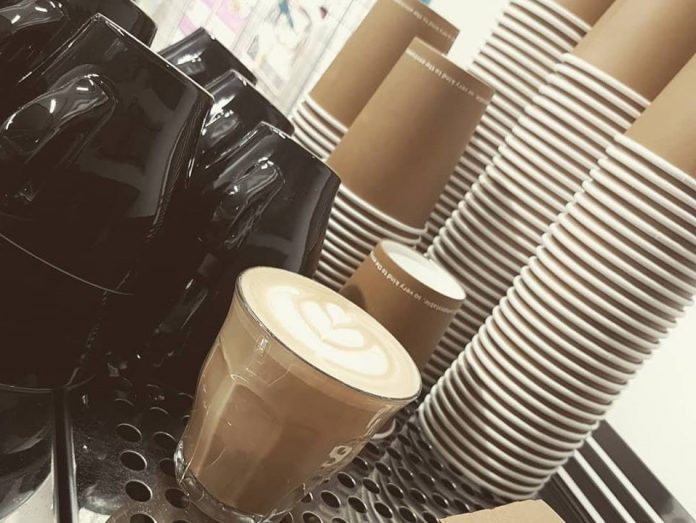 In recent times, businesses have had to come up with ways of creating a more environmentally friendly way of running their operations, but one coffee shop in Wrexham is leaving other larger firms in their dust with a pioneering method.

Blank Canvas moved into Wrexham’s multi-million pound arts hub in April having previously had a site in the town’s bus station but joint-owner Andy Gallanders believed the unit had fulfilled its potential. Now they are among one of the most exciting new projects in North Wales at Tŷ Pawb.

“It’s been very good, the site’s slowly finding its feet I think that’s fair to say.

“We’ve been on board since the project was announced a couple of years ago and we knew we wanted to be a part of it, we knew there were going to be challenges but at the same time we know that the facility is what Wrexham needs”.

Many coffee outlets are spread around the town be it a small local business or a national chain, but Blank Canvas have certainly tapped into their ethical roots and made history in the process with their completely compostable coffee cups. The situation has made national headlines in recent months and now the guys from Tŷ Pawb are leading the way in helping the planet.

“As far as I know we’re the only coffee shop in the whole of Wrexham that does both cup and lid that’s 100% compostable” revealed Andy.

“A lot of eco-friendly cups can only be sent to one or two factories in the UK and the likelihood of that cup being taken to the right place is a million to one, but at least [with ours] you know if you put it in a bin it’ll decompose, so once we knew it was compostable we chose these over other brands that can be recycled but still have to go to the same process”.

It’s not just the issue of cups – which from next week will also be used in their other store – that Blank Canvas is trying to eradicate. They have also been for quite some time making sure that anything and everything is put to good use, including their old coffee beans and where they source their milk.

“It’s [the milk] from Tomlinson’s, it’s from Minera and we’ve got a great working relationship with the team there, we went for that milk because we wanted the pouches rather than the plastic containers mainly because it’s less rubbish and less to landfill.

“We give away our used grounds because there’s nutrients still left in the coffee so we got together one day and asked why are we doing all of that when we could be going that extra step? Since going there our customers have noticed a difference.

“We get our coffee from a roastery called Neighborhood, they’re not Fairtrade, however, they pay the farmers directly better than Fairtrade prices which is one of the reasons we went for them”.

Andy and his business partner Phil are both proud to be a part of the community in Wrexham and are heavily involved amongst events in the town, and know all about the benefits of being in such a great location. North Wales has a plethora of options and opportunity, something that they are happy to thrive in.

“We’re so lucky in North Wales that actually in ten-twenty minutes you’ve got the best of both worlds with the lovely farmlands, but then you’ve got Liverpool and Manchester on the other side, so you can get really great produce really easily.

“We also get our hot chocolate from a lad who operates in Whitchurch which again is only down the road, it’s a great product, we know who they are, we know their family so you do feel like you’re a part of this big chain”.