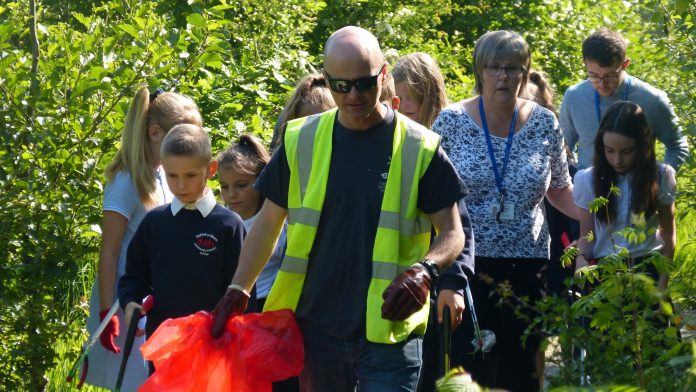 Making sure kids get the chance to explore the great outdoors is incredibly important.

So when the weather got as bright as it did earlier this week, we thought it was too good an opportunity to pass up!

Our Environment Team joined schools in the Caia Park area and Keep Wales Tidy at Caia Community Woods for a day of bug-hunting and litter-picking.

Children were provided with bug jars – equipped with magnifying glasses so they could examine their finds – by Alasdair Thomson from our Ranger Service, and litter pickers by Shane Hughes of Keep Wales Tidy.

Pupils from Ysgol Hafod Y Wern and the Wrexham Early Years Centre scoured the woods and neighbouring grass for bugs and litter.

After catching and examining a number of creepy-crawlies and clearing litter from the community woods, the children settled on the grass for a well-deserved picnic.

The event marked 10 years since the start of the Welsh Government’s Plant! scheme, which was set up to create a national forest of native broadleaved trees by planting a tree for every child born or adopted in Wales since January 1, 2008. The scheme funded the planting of Caia Community Woods in 2011.

The event was also attended by representatives from the Plant! scheme and Cllr Ron Prince, ward member for Cartrefle.

Councillor David A Bithell, Lead Member for Environment and Transport, said: “It’s fantastic to see children getting involved in caring for their local environment and taking an interest in nature and wildlife.

“This event highlights some of the important work we’ve undertaken to improve the quality of our green spaces.”