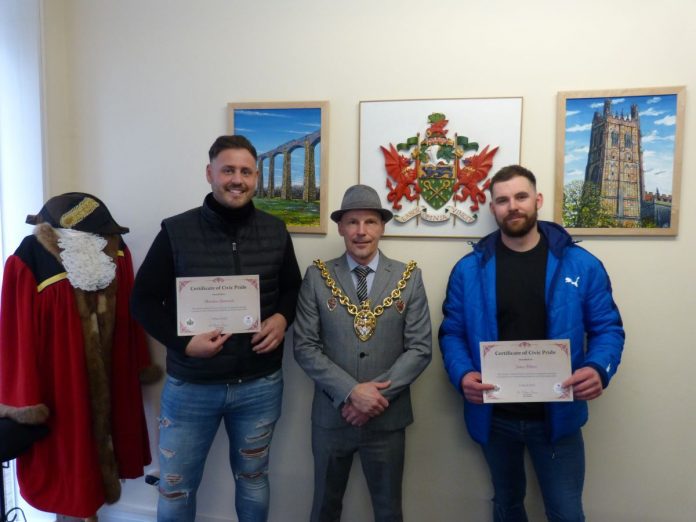 Two local tradesmen were recently invited to the Guildhall to receive a Civic Pride Award to recognise their selfless act of bravery.

Plasterers Matt Simmons and James Abbott were on their way home from work back in November 2021 when the unexpected happened.

Whilst travelling through the Pandy area of the Ceiriog Valley, they stopped the car due to a commotion and people shouting in front of them. When they looked at the cause of the scene, they were met with the sight of a house fire tearing through a property.

Immediately, James and Matt rushed into the blaze to save any occupants who may have been trapped by the flames.

Described by the men themselves as a sight unlike anything they had witnessed before, the building was engulfed in black smoke with only the red glow of the fire producing any source of light.

It was during their search that they heard a voice coming from the living room of the house. It was there that an elderly occupant was discovered in a state of confusion with singed hair and burns.

James and Matt quickly got the occupant out of the building to safety just as breathing was starting to become difficult due to the smoke.

Of the three members of the property, one was rescued by another unnamed member of the public and they were all treated in the Maelor hospital in Wrexham. Once the fire crew were on site, it took 20 firefighters to tackle the blaze.

Having heard of this incredible story, the Mayor of Wrexham, Councillor Ronnie Prince, was very keen to formally commend the men for their bravery.

James and Matt were invited to the Guildhall to meet the Mayor who presented them with a Civic Pride Award and thanked them for their life saving decision.

On meeting the gentlemen, the Mayor said: “As soon as I heard the phenomenal feat that James and Matt performed, I had to give my personal thanks to them. This is such a heroic and selfless act to have done and it just shows the community spirit and pride that goes on in our town. We look after each other around here and this is a prime example.”

“I give Matt and James my most sincere thanks for what they did that night. They saved a life which is incredible and it is an honour to present them both with a Civic Pride Award”.