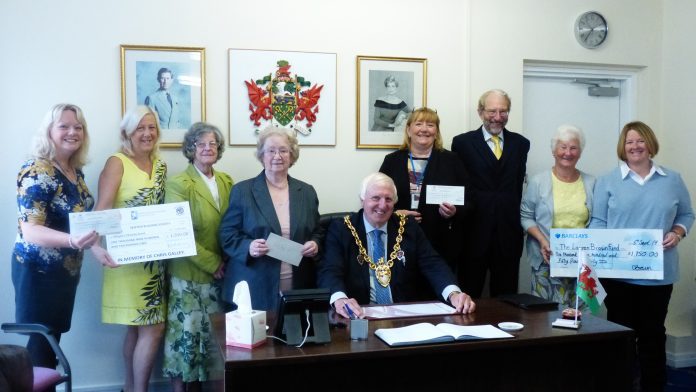 Four local charities in Wrexham have had their coffers boosted by the Mayor of Wrexham today after he presented them with cheques following his first year in the civic office.

Representatives of all four charities, Nightingale House, League of Friends at Maelor Hospital, Dynamic and The Lauren Brown Fund,  were invited to the Guildhall where they received cheques totalling £6287.00.  Nightingale House also received a cheque for £1910.00 from the West Cheshire MG Owners Club.

Each year the serving Mayor works and holds events for his chosen charities and over the last few years many thousands of pounds has been raised for local charities in this way.

Unusually, the current Mayor, Cllr John Pritchard was asked to serve for a second term in office after the nominated Mayor wasn’t re-elected in the local elections earlier this year.

“staffed by volunteers who work tirelessly”

“Local charities are often staffed by local volunteers who work tirelessly for their cause.  It’s always a pleasure for me as Mayor, and I know all former Mayors, to help that work by fundraising during our year in office.  I will have that privilege for another 12 months  and this year I will be fundraising for Nightingale House, the Lauren Brown Fund, Dynamic, Wrexham Renal Comfort fund and Bloodbikes Wrexham.  I would also like to thank staff in the civic office who are responsible for arranging many of the fundraising events.  Their work is very much appreciated.”

Featured photo shows left to right: Debbie Barton and Caroline Siddall from Nightingale House, Menna Story and Margaret Bryden from The League of Friends at the Maelor Hospital, Carol Gardner and Peter Butler from Dynamic and Rosemary and Clare Brown from The Lauren Brown Fund.