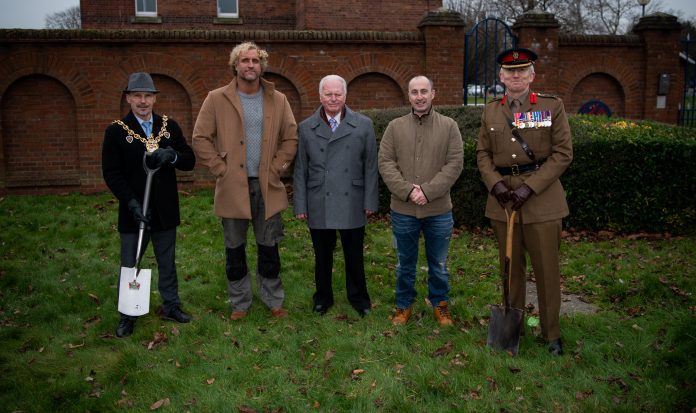 A turf cutting ceremony has been held to mark the start of the development for a new memorial site that will take pride of place outside the Hightown Barracks.

An association through the ages

Wrexham has proudly been linked to the Royal Welch Fusiliers for the past 350 years with the Hightown Barracks being an integral feature of the town and its military history. Councillor Graham Rogers, of the Hermitage ward, was keen to mark this link with a fitting tribute.

Councillor Rogers helped to form a sub-committee in 2017 to start raising funds to install a memorial garden on the green space area outside the gates of the barracks. They were told that the project would cost £95,000. To date, through various fundraisers, the community and sub-committee has raised an incredible £65,000.

The memorial will see a life-size bronze statue of a Royal Welch Fusilier soldier with the iconic Regimental goat at his side. This will be surrounded by a memorial garden with eleven arches incorporating slate to resemble regiments and past conflicts. The memorial will be lit up each night once installed.

Making the dream a reality

To make this project possible, some very special guests have been drafted in to bring the vision to life. Alongside architect James Rowbottom, Llandudno based sculptor Nick Elphick has created the bronze statue that will be the centrepiece of the garden. Nick may be a familiar name to some through his television work including “Salvage Hunters”.

Speaking about the project so far, Cllr Rogers said: “I’m very proud to be associated with this project and I must say that Offa Community Council have been fully supportive throughout. I’d like to thank everybody for all their hard work and contributions so far and long may our success continue”.

Among the people assembled to see the first sod being cut on the land was the Mayor of Wrexham, Councillor Ronnie Prince and Lieutenant Colonel (Retired) Nick Lock from the Royal Welch Regiment. They came with spades at the ready to do the honours of cutting the sod.

After marking the event, the Mayor said:“It’s a real honour to be here today at the turf cutting ceremony to mark the start of the development of what will certainly be a very moving and fitting tribute.

“I’m honoured to be here at the start to help get the ball rolling on this project and I look forward to seeing the finished article as it is wonderful to have this statue here to represent the Royal Welch Fusiliers”.

Lieutenant Colonel (Retired) Lock was also very pleased to join the proceedings that day. He said: “I am hugely proud, as a former Royal Welch Fusilier soldier, to be involved in this project. I think it’s a fitting tribute to all who have fought and served in conflict.

“This memorial enhances the environment for the barracks and also marks the beginning of a new era as we have A Company through the Royal Welch soon to be fully established here in Wrexham”.

Work now begins in earnest to continue to raise funds and start the installation of what will no doubt become one of Wrexham’s iconic features.