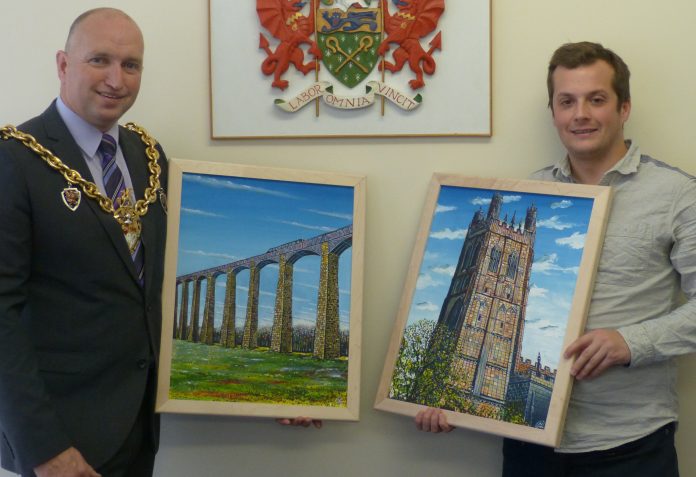 The work of a Wrexham artist has taken pride of place in the heart of one of the town’s most prominent civic buildings.

Artwork by painter Mikey Jones is on display in the Mayor’s parlour at the Guildhall.

The two paintings show some of Wrexham’s most recognisable landmarks, Pontcysyllte Aqueduct and the tower of St Giles’ Church.

Cllr Andy Williams, the Mayor of Wrexham, said: “I’d like to thank Mikey for these fantastic paintings, depicting two of Wrexham’s most striking and easily-recognisable landmarks. They’re excellent paintings which capture the iconic appearance of both structures, and both are very strongly linked with Wrexham’s social and economic history.

“I’m very pleased not just to be able to display images of some of Wrexham’s best-known sights in the parlour, but also the work of a Wrexham artist.”

Mikey said: “I’m very pleased to have these paintings of two iconic structures in the Wrexham area on display in the parlour, it’s a real honour.

“It’s great to see his support for local artists from all creative backgrounds. It turns out the Mayor is very talented with a paintbrush – every day I’m pleasantly surprised by the depth of creative talent we have in the area!”