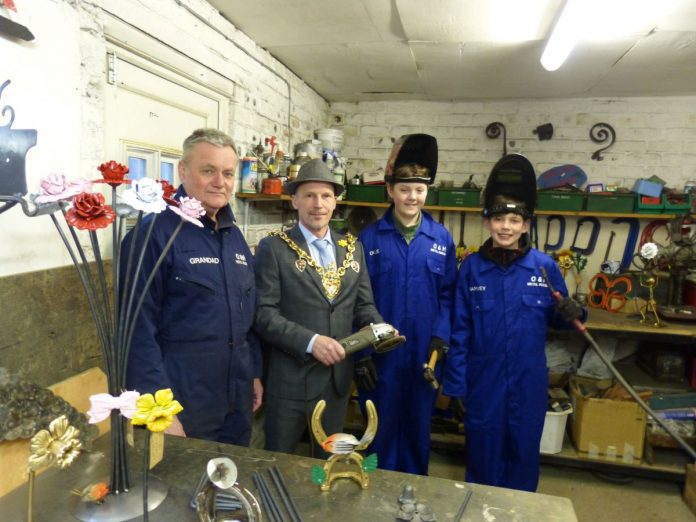 The Mayor of Wrexham recently visited a pair of young blacksmiths who are causing a stir around the UK with their creations.

Ollie and Harvey of O & H Metal Designs from Wrexham are cousins who took up their family tradition 18 months ago during the lockdown and became seventh generation blacksmiths.

Starting out making items such as small keyrings and bottle holders, they honed their craft under the guidance of their grandfather, Tony Roberts, to more complex designs such as metal roses, daffodils and daisies.

Due to their young age (Ollie, 14, Harvey, 13), the local press ran a story detailing the talent of the boys, which soon gained them recognition far and wide.

It was not long before television was calling with offers from ITV news and Channel 4. It was during their coverage on ITV Wales and National news that they were dubbed “Britain’s Youngest Blacksmiths”.

Their ongoing success and charity work led to two commission pieces from Acton Community Council. They first made a four-foot fish entirely out of spoons, which is situated in Acton Park Lake. The second creation was a ten-foot horseshoe, which comprises of horseshoes. This is displayed in Acton Smithy where their family originate.

The boys have enjoyed a successful 18 months. They have expanded their business and are taking orders all over the UK and overseas.

The hard work and talent has been recognised by some high profile figures. Ollie and Harvey have received letters from Downing Street and the Queen praising their unique gift. This led to the boys sending a piece of their work to the Prime Minister himself.

Their proud grandfather, Tony, said: “At the age they’re at now and the interest and enthusiasm the boys are showing to the craft, when the time comes for them to leave school, I hope all this work and experience serves them well for a good start in life and puts them in good stead.”

“They’re still as enthusiastic now as they were when they first started this nearly two years ago. It helps to keep the enthusiasm going by just letting them be as creative as they want and trying new and different designs”.

A civic visitor drops by

The Mayor of Wrexham, Councillor Ronnie Prince, was invited to pay Ollie and Harvey a visit. He dropped by at the workshop where the ideas come to life.

After a chat with the boys, the Mayor said: “It is so wonderful to see such talent hailing from Wrexham. The recent recognition Ollie and Harvey have received is definitely well deserved.”

“It has been a real honour to come here today and see how the magic is made. I have to say that it is also very lovely to see such a traditional trade being continued by the young generation. I wish the boys all the best for their continued success in the future”.