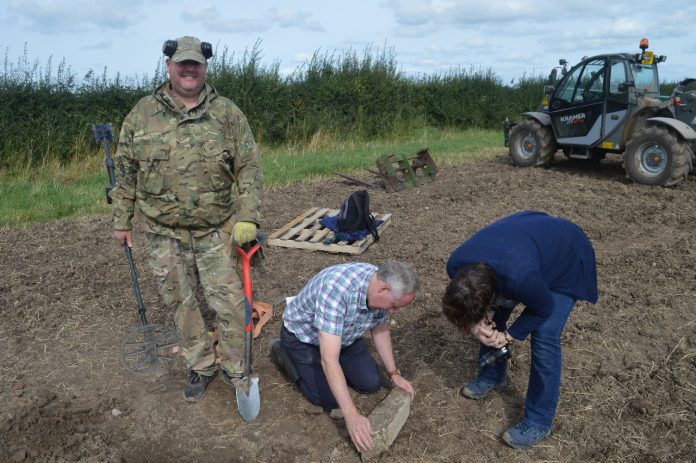 One of the most significant Roman objects found in Wales in recent years has been discovered near Wrexham!

Metal detectorist Rob Jones discovered a metal object in a field near Rossett and careful digging revealed the corner of a lead object with ‘writing’ on it.

Mr Jones from Coedpoeth, Wrexham alerted the local Finds Officer (NE Wales) for the Portable Antiquities Scheme in Wales (PAS Cymru) based at Wrexham Museum. Archaeologists from both the Museum and the Clwyd-Powys Archaeological Trust assessed what had been discovered.

The object found was a large lead ingot or ‘pig’ (about half a metre long, weighing 63 kilograms). The ‘writing’ reported by Mr Jones was a cast Latin inscription confirming that it was Roman and about 2,000 years old.

The exploitation of Britain’s natural resources was one of the reasons cited by Roman authors for the invasion of Britain by the Emperor Claudius in AD 43. Lead ore or galena contains silver as well as lead, and both were valuable commodities for the Romans. Less than a hundred lead ingots of this type are known from the mines of Roman Britain.  This rare find is particularly significant for archaeologists and historians because of its potentially early date, the location of the find spot, and because of its unique inscription.

GET THE LATEST COVID-19 INFORMATION FROM PUBLIC HEALTH WALES

Lead was mined and processed in several areas of the new province including in north-east Wales where lead processing sites have been excavated near Flint, presumably smelting ores extracted from the nearby Halkyn Mountain. A number of lead ingots of slightly later date are known from these works, often marked with the name of the local pre-Roman tribe called the Deceangli.

Susie White, the local Finds Officer (NE Wales) commented “It has been suggested in the past that similar exploitation took place in the Wrexham area around Minera and particularly Ffrith, where there is a known Roman site, although clear evidence is absent, probably as the result of more recent mining activity.

We don’t yet know where this ingot has come from and we will probably never know where it was going to. However given the find spots of other ingots from Britain of similar date, it may have been destined for continental Europe, perhaps even Rome itself.  The object could tell us a great deal about this important period of our past, a period which is still poorly understood in this area of the country.” 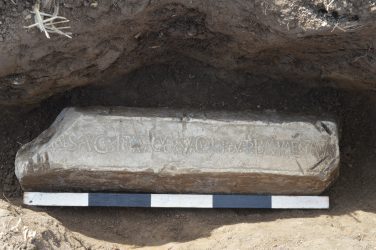 The inscription appears to mention one Marcus Trebellius Maximus, who was the governor of the province of Britannia under the Emperor Nero from AD 63-69. If true, the Rossett find represents the only example of an inscription bearing his name ever found in the UK and one of very few from the empire as a whole.  Trebellius was partly responsible for bringing stability to Britannia after Boudica’s revolt in AD 60/1, although he was ultimately forced out of the province by mutinous Roman soldiers who were dissatisfied with the lack of military activity under his governorship.

It is among the earliest dated inscriptions recording Roman seizure of Britain’s mineral wealth and testifies to its rapid exploitation following the spread of Roman power across the island. The production of the ingot presupposes prospection for metals, expropriation of mining sites and the mobilisation of labour, forced or voluntary, to mine and process metal-rich ores. The inscription also illustrates the bureaucratic control exercised over the production of valuable metals.

PAS Cymru and Wrexham Museum would like to commend both the finder and the landowner for bringing the discovery to their attention immediately, this allowed archaeologists to properly record the find spot so that the maximum information could be obtained concerning the object.

Councillor Hugh Jones, Lead Member for People at Wrexham Council commented “I’m delighted to be able to announce that the museum has aquired the ingot and I’d like to thank the Arts Council England/V&A Purchase Grant Fund, the Headley Trust and the Friends of Wrexham Museums for their support with the acquisition which otherwise would not have been possible. Its acquisition will allow the ingot to be displayed in the town nearest to the place where it was lost and rediscovered.”

The museum together with the University of Chester are hoping to undertake archaeological work on the site of the discovery, as soon as the pandemic allows, to see if any further information can be gleaned as to the circumstances of its loss.

The Portable Antiquities Scheme in Wales (PAS Cymru) is funded by Amgueddfa Cymru, MAALD and Cadw, and encourages the reporting of archaeological items found by metal detectorists and other members of the public. Thousands of objects are discovered by members of the public in Wales each year, including 20-30 items declared  ‘Treasure’ by coroners through the Treasure Act 1996.  PAS Cymru makes finds records accessible to the public via the PAS searchable online database containing information on over a million and a half objects.

Read the most up-to-date information about Covid-19.