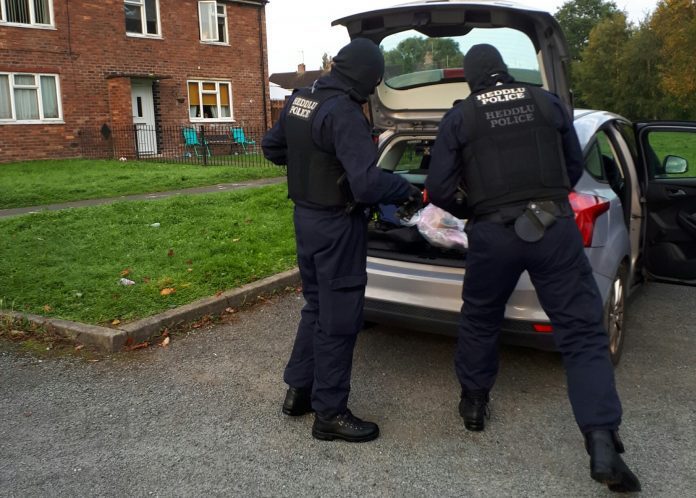 A series of warrants executed this week as part of an investigation into the supply of Class A drugs in Wrexham has so far resulted in 19 arrests.

Operation Lancelot, which has been over five months in the planning, has been investigating the activities of a local organised crime group supplying heroin and crack cocaine in the area.

More than 50 officers took part in a series of arrest warrants in Caia Park and other locations across Wrexham on Monday September 28. Further warrants were also executed in and around the town on October 1 and today (October 2).

Fourteen men and five women have so far been arrested, charged and remanded in custody on suspicion of conspiracy to supply Class A drugs.

Chief Inspector Steve Roberts said: “I am delighted with the way this carefully planned operation has developed this week. We have been determined to dismantle this gang and a large group of men and women have been arrested and charged with serious offences. It is now a matter for the courts.”

“I would like to thank the local community for the support and information they have given us to help carry out such a large scale targeted operation. I hope residents and businesses will see that North Wales Police is committed to tackling this criminal activity which brings so much misery to individuals and blights communities.”

Councillor Hugh Jones, Wrexham Council’s Lead Member for Communities, Partnerships, Public Protection and Community Safety, said: “Even during these challenging times, the fight against drugs and organised crime continues, and I’d like to thank North Wales Police for carrying out this important operation.

“It’s also important to recognise the work of partner agencies supporting the local community, and the community itself for their understanding.

“Illegal drugs bring so much misery to people’s lives, and targeted initiatives like this play an important part in supporting our communities – helping to ensure residents feel safe and able to go about their daily lives in peace.”