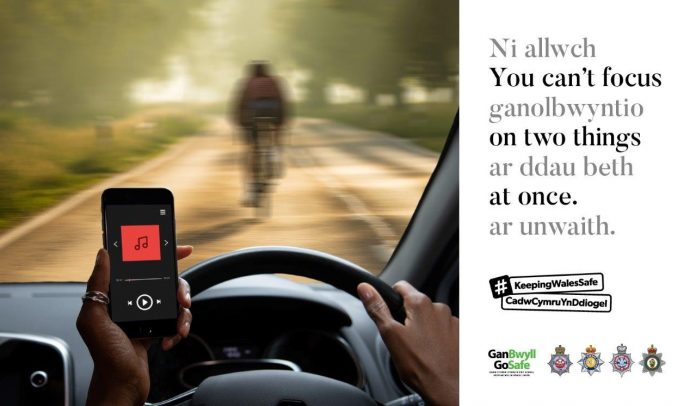 A crackdown has been launched throughout Wales to target drivers who put their lives and the lives of others at risk by using mobile phones whilst driving.

Led by South Wales Police, forces have launched a social media campaign to remind drivers on the dangers of holding a mobile phone while driving, and to encourage them to report drivers who are using their phone at the wheel.

All four police forces across Wales will be focussing on some of the main reasons people use their phones while driving; texting, calling, using a sat nav, using social media, and listening to music. They will also be carrying out targeted operational activity providing an increased police presence in each force from March 16 – March 29, 2020.

The aim of the campaign is to remind the public of the laws around holding a phone while driving and to encourage them to report dangerous drivers. Even when stopped at traffic lights or queuing in traffic, it is still breaking the law to use a hand-held mobile phone at the wheel.

It’s illegal to hold a mobile phone while driving, don’t picture yourself in a collision. 🚗 📵

You’re about 6 times more likely to be involved in a collision using your mobile phone while driving than you would be driving intoxicated. 🚨#KeepingWalesSafe pic.twitter.com/ybhzoU8z4I

Superintendent Jane Banham said: “Increasing amounts of drivers are choosing to use their phone while driving to call, text or even check social media.

“It’s illegal to hold a mobile phone while driving. The message is very clear, it’s not worth it.”

If you suspect someone is driving while using their hand-held mobile phone, report it on 101, 999 in an emergency, or Crimestoppers anonymously on 0800 555 111.

If you have video or photographic evidence which has been obtained lawfully and safely you can submit it directly to the police via #OpSnap on the Go Safe website.