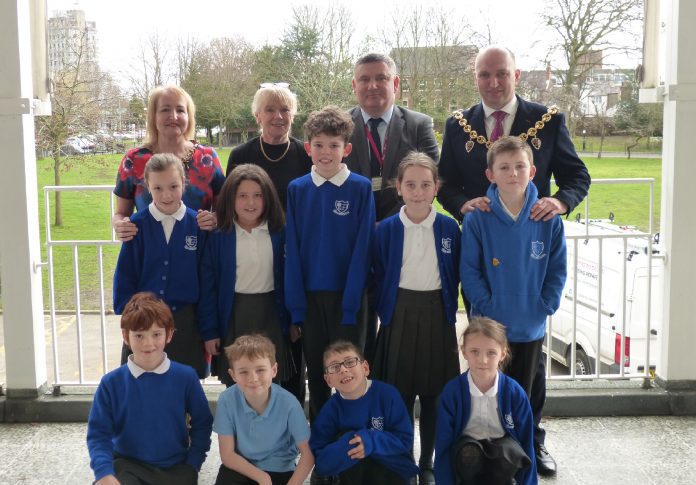 School council members had the chance to take a look at some of Wrexham’s history when they were given a tour of the Mayor’s Parlour.

Pupils from Ysgol Rhostyllen visited the Guildhall earlier this week, and were given a tour of the Mayor’s Parlour and the main council chamber by Cllr Andy Williams, the Mayor of Wrexham.

As we’ve pointed out before, there’s plenty of artefacts from Wrexham’s history on show in the parlour, and the Mayor discussed the history of some of the items on show with visiting members of Rhostyllen’s School Council.

WANT TO GET MORE TIPS AND INFO? SIGN-UP FOR OUR RECYCLING EMAILS…

Cllr Williams said: “I’m always very pleased when we have members of school councils in attendance at the parlour, and the visiting pupils from Ysgol Rhostyllen were no exception – they were a credit to their school.

“They were very interested to hear of the history of some of the items on show in the Parlour, and some of the civic regalia, including the mace.”

Cllr Mark Pritchard, ward member for Esclusham, said: “It’s wonderful to see the level of interest shown by primary school pupils in the history of Wrexham, and the opportunity for them to visit the Guildhall and get an insight into the Mayor’s role is a very important one.

Want to get more tips and info? Sign-up for our recycling emails…