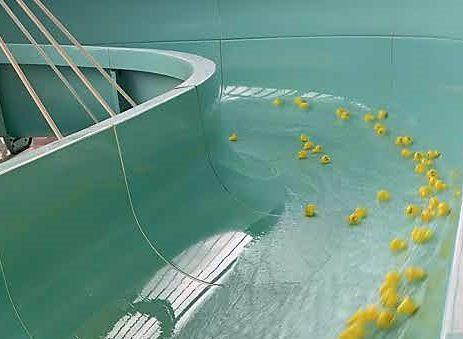 Staff and visitors to Waterworld, operated by Freedom Leisure on behalf of Wrexham County Borough Council, took part in a day of fundraising events for the British Heart Foundation (BHF) Cymru, raising more than £700.

The day started with what went on to become an eight-hour fundraising spin on an exercise bike – with both staff and customers alike taking to the bike to add to the overall mileage.

ANOTHER BAD DEAL FROM WELSH GOVERNMENT MEANS WREXHAM IS FORCED TO MAKE MORE CUTS. HAVE YOUR SAY…

The main event saw 100 rubber ducks race down the 65-metre waterslide at the leisure and activity centre – customers had the chance to “buy” a duck at £2 each, with the hope that their feathered racer would be the winning waterfowl – with one competitor even bringing in duck food in the hope of making his chosen duck race faster.

Duck No 24 triumphed in the end, winning £100 for owner Pat Williams and netting a further £100 for BHF Cymru.

Donations were also taken in advance of the day, giving competitors the chance to win hampers and a number of prizes donated by local businesses – with customers also donating cakes for sale on the day.

Cheryl Lockyer, Regional Fundraising Manager, at British Heart Foundation Cymru said: “I’d like to say a massive thank you to the staff and members of Freedom Leisure for their support.
“Every penny you raise helps us fund pioneering research and support patients and their families.”

Cllr Andrew Atkinson, Lead Member for Youth Services and Anti-Poverty, with responsibility for Leisure, said: “I’m very pleased to see the fundraising day at Waterworld raised as much as it did, and would like to thank all of those involved – staff and volunteers – for their efforts in making the day as successful as it was.”

We’re being forced to make even more cuts. But before we do anything, we want to know what you think.