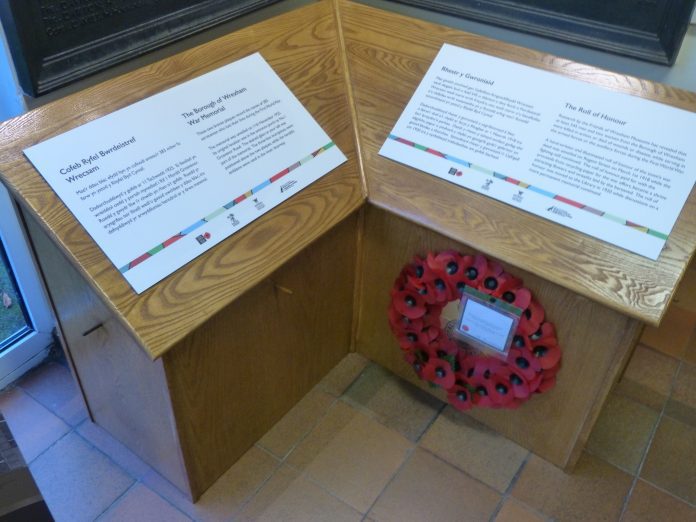 The Memorial Hall in Wrexham’s Town centre has had a bit of a refurb in time for the centenary of the end of the First World War on Sunday.

Built to commemorate those who died in the Second World War was built in 1956 and has since become home to several memorial plaques, both inside and outside the Hall.

In addition to the names of the WW2 dead there’s two bronze plaques dedicated to those who fell in WW1 and two plaques with the names of employees of the Borough Council who were killed in the two wars and a slate plaque which refers to the Burma Star.

Outside are memorials to the RWF, the familiar cenotaph where the annual Service of Remembrance takes place and also the Burma Bell, the Normandy Veterans Memorial, the Falklands Memorial and a memorial to Flt Lt D S A Lord VC, DFC, which used to stand on the corner of Grosvenor Road and Regent Street.

Visitors to the area were often a little “underwhelmed” when they viewed the areas or came to pay their respects and they have now been enhanced with new seating, standards and display panels recording the history of the Hall.

There’s also a new “wreath plinth” where wreaths and crosses can be laid by those who wish to wish to remember their friends and relatives in this way. Previously they were laid against the walls where they often fell down and could often look “abandoned”. Now they can be placed with respect.

The first wreath was laid by Mr Roy Bellis, in memory of his father Jack Bellis, former Royal Welch Fusilier and Normandy veteran who sadly passed away this year aged 102.

Outside the facia has been replaced and visitors will no longer be able to miss the reason the hall is there – as a Memorial to those who fell.

Cllr David Griffiths, Armed Forces Champion, said: “All this work to the Memorial Hall has been made possible by funding from the Armed Forces Community Fund Trust and we are very grateful for their support. The Memorial Hall is a very well known building but I sometimes feel we were beginning to forget why it was built and it very fitting that the history of the building along with the bench seating and standards really make it stand out as a place of memorial, humility and respect.”