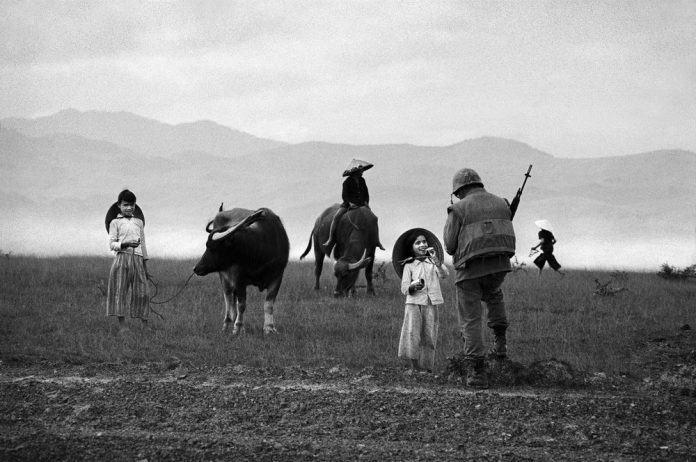 The stunning work of one of North Wales’ most acclaimed photographers is to go on show in a brand new exhibition at Wrexham Museum.

Phillip Jones Griffiths was one of the most influential photographers of the late 20th century.

Born and raised in Rhuddlan, North Wales, Griffiths was a lifelong pacifist who sought to reveal the impact of war on combatants and civilians through his work.

The upcoming exhibition, a century on from ‘the war to end all wars’, concentrates on his photographs of two extended conflicts: the Vietnam War in south-east Asia and the troubles in Northern Ireland.

From Rhyl to Saigon

Griffiths’ long career in photography started on the North Wales coast where he became a member of the Rhyl Camera Club while still a schoolboy, taking photos as weddings and working at the nearby Golden Sands holiday camp.

After leaving school Phillip became an apprentice pharmacist at Boots the Chemist in Rhyl where he was able to borrow cameras for the weekend. This is when, he claimed, he learned how to take pictures.

Phillip once said: “I got all that beautiful landscape stuff out of the way in North Wales and was ready for the rest of the world.”

After studying pharmacy at Liverpool University, Phillip moved to London where he worked nights, allowing him to do freelance photography for The Sunday Times and The Guardian, before joining the staff of The Observer in 1961.

Assignments in Europe, Africa and North America followed. Then in 1966 Phillip arrived in Vietnam and quickly developed a respect for the people whose manner reminded him of rural Wales.

Inspired by his pacifist beliefs, Griffiths believed that his role as a photographer was to question the morality of the War.

In 1971, Griffiths published Vietnam Inc, a book that soon became a classic of photojournalism.

In 1972 and 1973 he travelled to Northern Ireland at the height of the Troubles. His photographs from this period show how urban warfare was mixed with mundane daily life.

Griffiths died in 2008. It was his wish that his collection be housed in the land of his birth and that the Phillip Jones Griffiths Foundation for the Study of War be established.

A Welsh icon of photography

Lead Member for People – Communities, Partnerships Public Protection and Community Safety, Cllr Hugh Jones, said: “Phillip Jones Griffiths is one of the most revered and influential figures in the world of photography. His images of war and conflict and the effect it has on ordinary people has left an invaluable legacy and I’m delighted that we are going to be able to show some of this in Wrexham.

“The exhibition includes some extremely powerful and thought provoking images which really do need to be seen up close for full effect. I hope as many people as possible will take the opportunity to come and view the work of this Welsh icon of photography.”