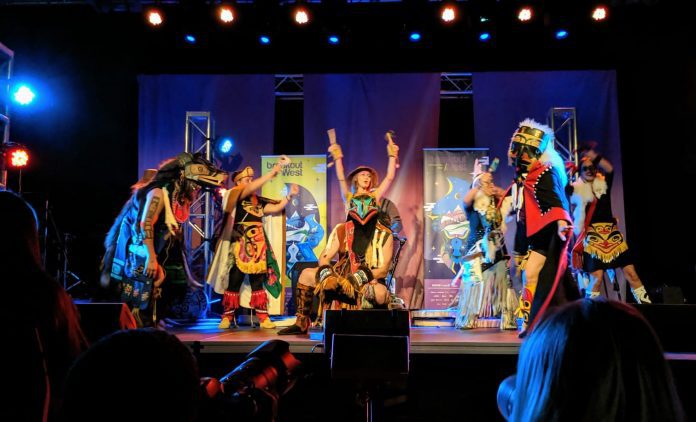 FOCUS Wales have been working with Wales Arts International to celebrate the UNESCO year of indigenous languages during BreakOut West festival in Yukon, Canada.

BreakOut West is the primary music industry showcase event hosted by the Western Canadian Music Alliance. Attracting music industry reps from across the globe, each year this exciting event is held in a different western Canadian region on a rotational basis. This year, the event was held in Whitehorse, Yukon over 2nd-6th October, 2019. Welsh bands Worldcub and Baby Brave were invited to showcase at BreakOut West this year.

As part of the ‘UNESCO International Year of Indigenous Languages’ celebrations, FOCUS Wales and BreakOut West arranged a trip for Snowdonia band Worldcub to meet with musicians and leading figures in the Carcross/Tagish First Nation community in Yukon for a special gathering in celebration of language and music.

Dion from Worldcub reflected on the experience:

After an early morning journey through thick snow and spotting grizzly bears, we were welcomed with a prayer by Elder Geraldine James when we arrived at Carcross, followed by a Smudging Ceremony. Standing in a circle, everyone was invited to open up and introduce themselves, the Elder spoke of their struggle and fight to save their heritage and language from extinction. We spoke about the history of the Welsh language and everyone noticed the parallels that existed.

It was an honour to share the stage to perform songs and share stories about our languages with the clan, it was great to see how passionately dedicated they are to the fight for their heritage and language. These languages are hundreds of years worth of history that want to be owned and they rely on this in order to exist, they should be heard in pubs, cafés and on the streets. We learnt a lot from the day and we definitely have a lot of stories to tell back home.

We were so lucky to have visited the Learning Centre in Carcross, learning about the history of the people in the community and joining in their traditions, we owe a huge thanks to FOCUS Wales and BreakOut West for arranging it and getting us there… and back, alive!

FOCUSWales is supported by Arts Council of Wales and Welsh Government.