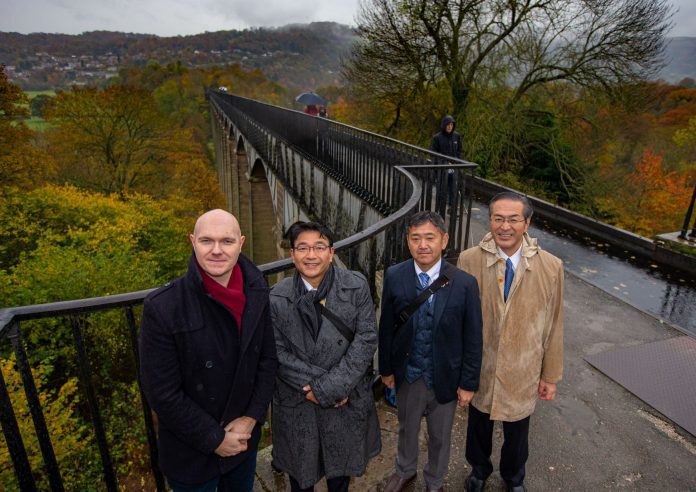 Wrexham had a group of special international visitors this week as a delegation from Himeji, Japan visited the Pontcysyllte Aqueduct and Chapel Tea Rooms in Trevor.

Hideyasu Kiyomoto Mayor of the Japanese town Himeji, which is home to the UNESCO World Heritage Site Himeji Castle took the time to visit Pontcysyllte during a visit to North Wales.  Himeji Castle is in the process of being twinned with another UNESCO World Heritage Site – Conwy Castle and whilst in the region, the Japanese delegation were keen to experience our own World Heritage Site and take a walk over the 126ft tall aqueduct.  Despite the inclement wet weather, the delegation marvelled at the view of the Dee Valley decked in golden autumnal colours and spent time talking about tourism, North Wales and the Rugby World Cup with our Deputy Mayor Cllr Ronnie Prince and Destination Manager Joe Bickerton.

After taking in the views from the aqueduct, the delegation were given a warm welcome at the Pontcysyllte Chapel Tea Rooms, where they enjoyed some Bara Brith and some great Welsh hospitality, before they headed off to visit Japanese manufacturing factory Hayakawa on Wrexham Industrial Estate.

“It was wonderful to welcome the Japanese delegation to Pontcysyllte today, a destination that the party really felt that they had to see given its global reputation.  We are seeing visitor numbers from Japan increase year on year at the site and the delegation spoke about how well Pontcysyllte and North Wales is marketed internationally.  One of the main reasons for the dramatic rise in our fortunes as a tourism destination is that North Wales is at the epicentre of the growing adventure holidays market, but also boasts two UNESCO World Heritage Sites.”

“Although the main focus of the trip is the twinning of Conwy and Himeji Castles, we were delighted that the party was able to visit Wrexham and experience part of the World Heritage Site.  Our work in Japan over recent years has not only resulted in the twinning with Conwy, but also seen Wrexham and North Wales be added to the main Japanese heritage visitor itinerary aptly named ‘The Road of Castles in Wonderland’.  We have worked hard to promote the region and as a result we have seen a sharp rise in the number of Japanese tourists visiting North Wales.”

If we get a bad settlement, we’ll have to look at further cuts. Have your say.