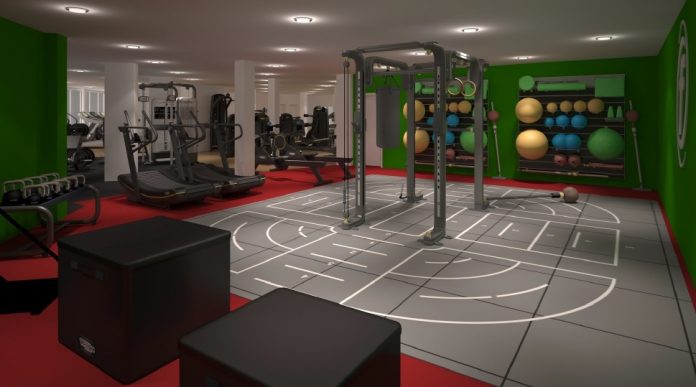 You might have noticed ongoing work at leisure centres across Wrexham.

Wrexham Council and partners Freedom Leisure are in the middle of a long-running plan to improve leisure facilities across the area.

The two entered into a contract last spring, with Freedom Leisure taking over the management of four leisure and activity centres and five dual-use sports facilities.

Since then, the council and Freedom Leisure have embarked on a £2.7 million investment, with revamps planned for all four centres – as well as new 3G pitches at sites across the area.

The improvements, bringing in state-of-the-art gym equipment and new facilities, will give members new ways to get fit.

Cllr Paul Rogers, Lead Member for Youth Services and Anti-Poverty, with responsibility for Leisure, said: “I recently opened the new and improved facilities at the Gwyn Evans Leisure Centre in Gwersyllt, and the Queensway Stadium in Caia Park.

“Gwyn Evans underwent more than £50,000 of improvements, while the Queensway Stadium had more than £80,000.

“I was really impressed with the improvements at both – but these are just part of the ongoing improvements being carried out by ourselves at Wrexham Council and Freedom Leisure.”

A full schedule of improvements is planned for Chirk and Waterworld, with a combined investment of more than £2 million for both

Andy Harris, Freedom Leisure Area Manager, adds: “The first half of this year has certainly been busy with the many different improvements being made to these wonderful community facilities in Wrexham.

“Two new 3G pitches and three gym refurbishments down, we have a third brand new 3G pitch at Morgan Llwyd Leisure & Activity Centre, leaving us with the grand unveiling of the major improvements at Waterworld at the end of summer!

“We operate these facilities in partnership with the council, and are hugely grateful for the investment they are making to improve them – we’re more than just a leisure centre operator and pride ourselves on engendering active communities.”

3D images of plans for Waterworld

Freedom Leisure has unveiled CG images of the new-look Waterworld, with a video available here…

Thanks to users for their patience while new lift was installed

Wrexham Council and Freedom Leisure are also happy to announce that, outside of the planned improvement works, a new lift is in place at Waterworld.

The original lift was broken for some time. Attempts to repair the lift weren’t successful, and it was decided that a new lift be installed to make sure all centre users could continue to access facilities on the first floor.

Cllr Rogers added: “I’m also very pleased to see the new lift in operation at Waterworld – centre users have been very patient while the former lift was replaced, and they should be thanked for that.”

Andy Harris, Freedom Leisure Area Manager, said: “I’d like to echo Cllr Rogers’ thanks to Waterworld customers for their patience during this time. As I’ve noted before, us having the lift out of order for so long definitely did not serve our interests, and we wanted there to be a working lift up and running at Waterworld as soon as possible.

“Centre users have been very patient throughout the work on the lift, and I’m glad to report their patience has been rewarded by having the lift in service much earlier than we expected.”

For more information, check out www.freedom-leisure.co.uk