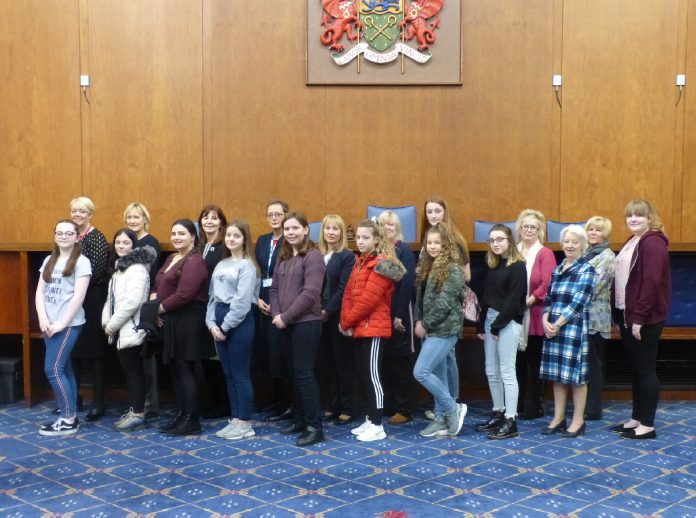 You might remember the series of events that took place earlier in March as part of International Women’s Day (IWD).

As well as a series of events throughout Wrexham town centre, the day also saw young women from throughout the county borough shadowing women in public service and political roles during their day – giving them an insight into public life they might not otherwise have had the chance to get.

Here’s what a few of those who took part had to say about their experiences of the day.

Behind the scenes at the NHS

She had the chance to sit in on behind-the-scenes meetings at the NHS, including those covering budgets and consultation, and spoke to female staff within the senior teams on their day-to-day roles and how they got their jobs.

She was keen to take part in the day’s events, having taken part in shadowing work for International Women’s Day in 2018.

Emilia said: “I saw behind the scenes at the Maelor and the number of different roles that are not front line.

“Doctors and nurses get a lot of credit for the great work they do, but the staff behind the scenes need more credit as the NHS would not run without them.”

She added that she would recommend IWD and similar events to young women interested in public life.

During the day, Jessie shadowed Donna at a number of different council settings, including the Info Shop on Lambpit Street and the Youth Justice Service. She also spoke to Donna about how she became service manager and her career to date.

Jessie added that she would recommend the event to other young women, and said: “I enjoyed the day so much, and would love this to be a representative day for in which other organisations might take part.”

“Pleased to see the level of involvement”

Cllr Andrew Atkinson, Lead Member for Youth Services and Anti-Poverty, said: “It’s so important that we do everything possible to mark International Women’s Day – not just with events, but by giving young women who might be considering a career in politics or public service the chance to see what takes place behind the scenes.

“As such, I’m very pleased to see the level of involvement on International Women’s Day earlier this month, and I’m especially pleased to see comments from young women like Emilia and Jessie who clearly benefited from their experiences during the day.”