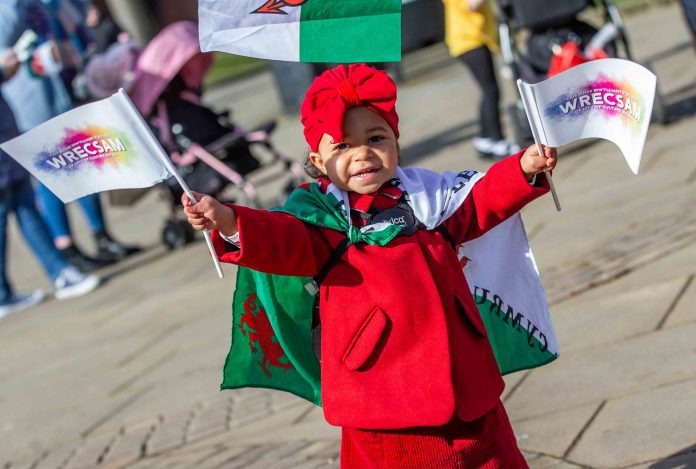 Next week we will find out if Wrexham has been selected for the UK City of Culture 2025 shortlist. Admittedly there is a mix of excitement and nerves leading up to the announcement!

It’s been quite a journey so buckle up as we take a look back at what’s been achieved in such a short time:

Our bid was submitted last summer after a rule change meant that non cities could compete. Wrexham is competing as a county region. 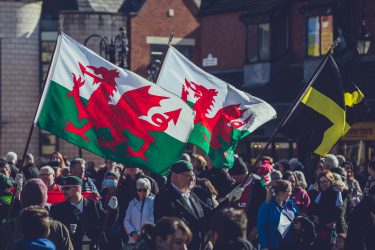 On the 8th of October last year it was announced by competition organisers DCMS (the Department of Culture, Media and Sport) that Wrexham was through to the competition longlist. Later that month all regions on the longlist were invited to send delegates to Coventry (Current holder of UK City of Culture) on a fact-finding mission. 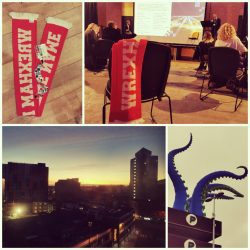 A core team was assembled to develop our brand, communications and engagement strategies. After a short time working behind the scenes our brand and logo were developed and first shared at our initial stakeholder meeting at Moneypenny HQ. 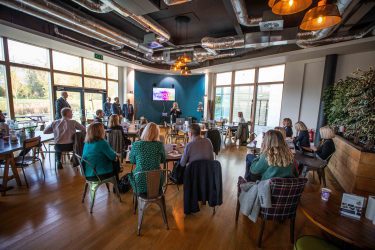 This provided the first opportunity to share our #Wrecsam2025 logo and explain that the ‘colour splash’ represents coal dust as a nod to our industrial past, while the colours used are to represent the vibrancy and diversity of every single one of us who lives, works and plays in Wrexham. 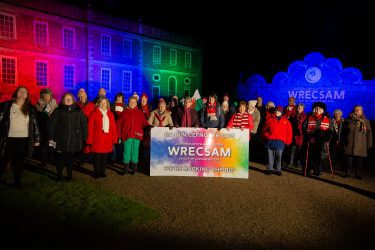 Our logo also prominently features the Welsh spelling of ‘Wrecsam’ – We’re Welsh, we speak Welsh, and always encourage its use. Shortly after this meeting Joanna Swash, CEO of Moneypenny was appointed City of Culture steering group chair.

Planning started in late November for bid promoting events that would be held in January. Unfortunately during the later stages of planning, the emergence of the Omnicron Covid strain and subsequent re-tightening of rules meant that these plans would need to be scrapped. Still wanting to promote the bid but in a covid safe way – after a bit of head scratching and dead ends, a seed of an idea formed.  Rather than asking people to come to us, can we go to them? But more on this later.

We were still able to attend a few face to face events earlier on in December such as the ever popular Victorian Market. This provided a really good insight into what people thought of the bid, and was really encouraging.

Due to the extremely tight timescales of the bid Wrexham County Borough Council have been leading on it, however the bid is for the county of Wrexham, so we were keen to get as much community involvement as possible. On 21st December we announced grant funding for communities and organisations to apply for up to £1,000 to host an event or activity promoting the City of Culture bid. Fast forward a few weeks and we had over 70 applications and awarded over 50 grants. Some events have already taken place, but there are many more to come. Keep your eyes peeled for the #Wrecsam2025 #tag for further details of upcoming events. 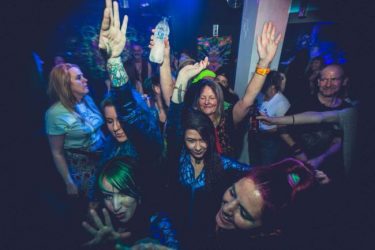 The culture bus idea came about as we wanted to engage with the entire county in a covid safe way, without encouraging mass movements and gatherings. Rather than people come to us, we would go to them.  Over the course of 3 days, 60 locations were visited by 2 double decker buses with ‘flashmobs’ occurring across the county, our list of performers included megan Lee and: 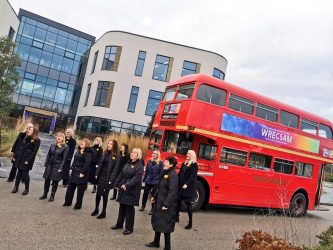 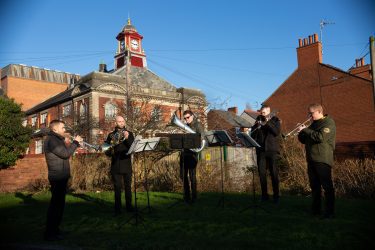 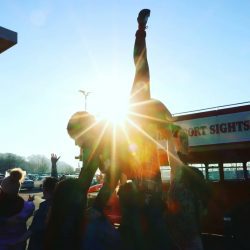 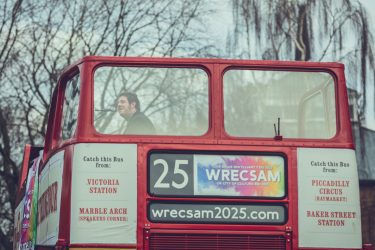 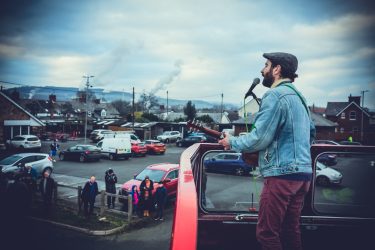 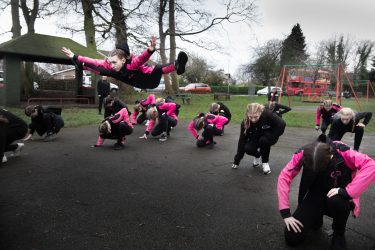 Due to covid restrictions we were not allowed initially to advertise the buses whereabouts other than saying ‘keep an eye out.’ However half way through day 1 it was announced that limits on outside gatherings were being dropped and we were able to pre-promote the locations for the next 2 days allowing more people to get involved 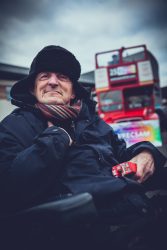 As part of our bid we want Wrexham to become capital of play for the UK. We have a great history of play in Wrexham and this is something that we would like to develop further with one of Wrexham’s focus points for play being The Venture on Caia Park, an organisation that has been improving and enriching the lives of children for decades.

We have Wales’ largest national youth organisation, the Urdd backing our bid, stating: “We believe that winning the title of City of Culture, will have an immense impact on the lives of children and young people. “It will be an opportunity to promote the Welsh language and culture to a wider audience through community, youth, sport, cultural, humanitarian, peace, and international projects. “It will also provide a platform for children and young people to amplify their aspirations and demonstrate the power of their voices.” 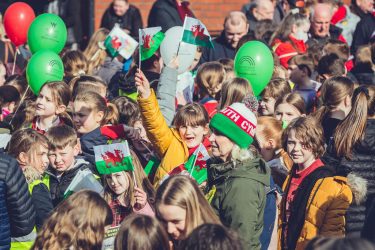 Football plays a big part in Wrexham’s culture, and Wrexham is the home of Welsh football. It’s no surprise then that football has played a big part in our bid engagement. On January 22nd Multi award winning Bellvue FC played the newly formed Wrexham Town Police FC (formed to break down barriers between the police and the community). We were invited to be part of this very special community game and sponsored the live stream from Colliers Park, with the commentary kindly provided by local radio station Calon FM. 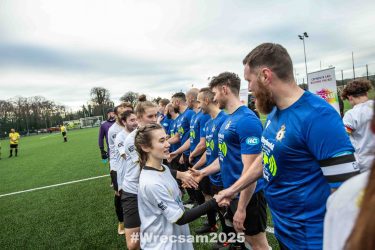 During the game the City of Culture team were handed a letter from Football Association Wales (FAW) president Steve Williams announcing our national football sides backing of our bid.

In support of the bid Wrexham AFC have provided a statement of support alongside unveiling a   66m x 18m Wrexham City of Culture bid support banner on the Kop end of the Racecourse ground, as they work towards its re-development. 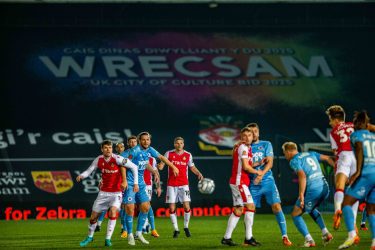 As part of the bid submission on February 2nd we invited members of the media to meet community members who have been involved in the bid. We also chose to premier our bid videos on the same day. ‘La, we are Wrecsam’ generated lots of interest as it featured the work of Wrexham poet Evrah Rose in collaboration with well-known Welsh beatboxer Mr Phormula. Both videos premiered on the day can be viewed on the links below:

City of Culture bid events will be happening right through till the end of May so it’s worth seeing what’s on and getting involved. We’d love to make it through to the longlist and then win and become hosts in 2025. There is a real community appetite for Wrexham to host and experience the benefits of what that will bring. 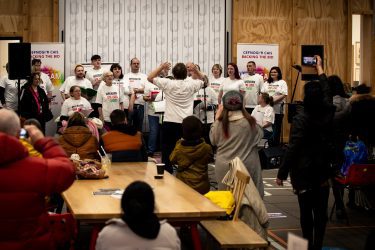 Joanna Swash, CEO of Moneypenny and Chair of the City of Culture Steering Group said: “The amount of Business and Community involvement in the bid is exceptional. Wrexham really is a very special place to live, work and visit and the pride that people have for the county really shines through with the excellent levels of engagement we have had in promoting this bid.”

Hugh Jones, Lead Member for Communities, Place and Partnerships at Wrexham County Borough Council added: “It’s remarkable what has been accomplished in a few short months and we go into next week with our heads held high and proud of these achievements. “There really is a buzz in the community surrounding the bid and we are hoping to build upon that during the next round of the competition.”