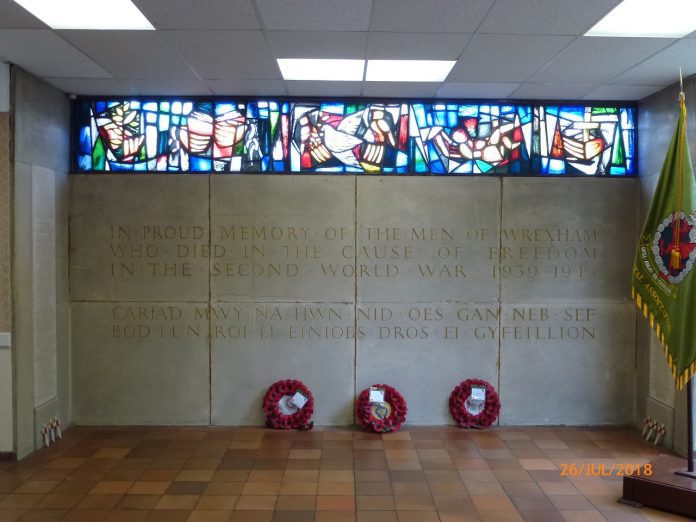 Wrexham’s Armed Forces Champion, Cllr David Griffiths has paid tribute to all those who served and sacrificed during World War 2 as Wrexham commemorates and celebrates the 75 year anniversary since the end of that global conflict.

He said: “Tomorrow is a special day for Wrexham as we take time to reflect on the terrible human toll WW2 took on our men, women and children who bravely answered the call to protect and serve their country. Whether it was service to country by working in factories and on the land, bringing up small children during the days of rationing or by fighting overseas, everyone during that time played their part and we remember them all on this special anniversary and thank them for what they did.

GET THE LATEST COVID-19 INFORMATION FROM PUBLIC HEALTH WALES

“Once again we are all asked to protect our country but this time from an invisible enemy – the virus, Coronavirus – which had claimed many, many lives across the UK and which remains a threat to us all. We are being asked to sacrifice our liberties for all but essential journeys and for those who are key workers. But we are not being asked to fight but to stay at home. I urge each and every one of you commemorate and celebrate VE Day 2020 by staying at home and remembering that we are not the only generation to have our freedom restricted. Thank you all for taking the time to remember from the comfort of your home.”

When Germany surrendered on May 8 1945 news travelled fast and in Wrexham it was received with joy and sadness. At last the war was over but so many would not return to their families and loved ones. Soldiers remained overseas and it would be many weeks and months before they could return.

Nevertheless, celebrations started and street parties were organised across the county borough. Here’s a photo from Erw Las kindly provided by Wrexham History Group – who run a very interesting facebook page if you want to check them out. 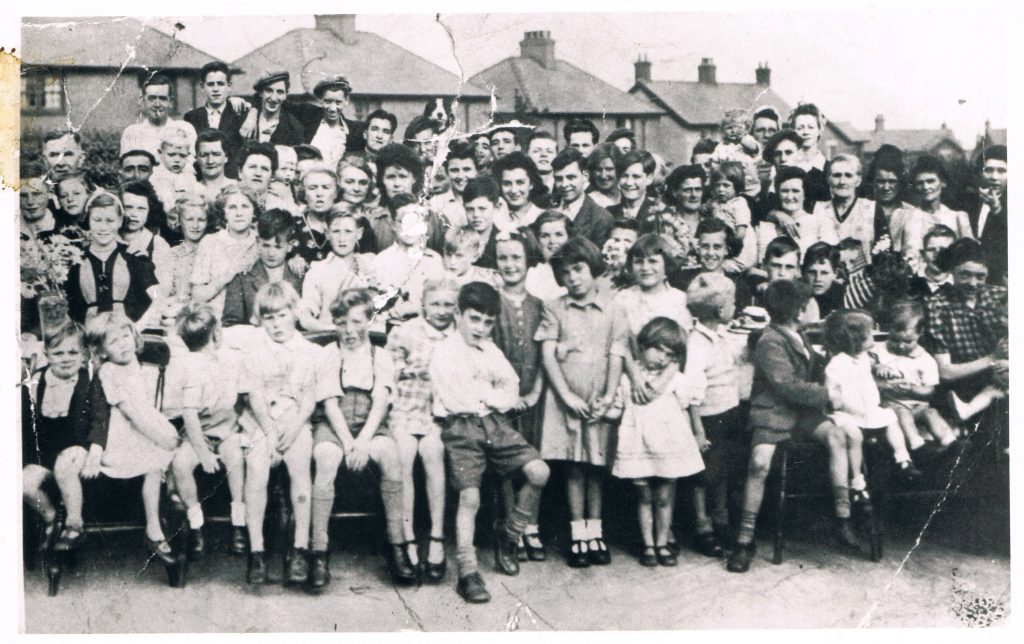 And one of Jarman Avenue and Bennions Road from Sheila Reynolds, who’s also a member of the Wrexham History Facebook group. 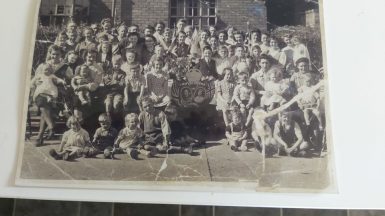 For many children it would have been the first party they’d ever been to!

The Memorial Hall – VE Day tribute to all those who fell

The Memorial Hall is a rare example of a local memorial that was inspired by the feeling that the town should commemorate those who had been killed in WW2.

In fact initially it was referred to as the ‘Victory Commemoration Hall’ and a considerable sum was raised for the tribute. The original plans were very grand involving art gallery, concert hall, dance hall, meeting room and shrine set in gardens. However, the problem was the challenge of getting the project started when there were building restrictions, material shortages and unrealistic expectations on what money could be raised and how much such a hall would cost.

Initially the plan was to build the hall roughly where the post office sorting office now is, with good access to the railway station; but the opening of the Technical College and the William Aston Hall meant that couldn’t go ahead. There were also conflicting opinions over whether it was right to spend money on a hall when ex-servicemen needed housing and whether funding should be accepted from the council to bridge the gap between the money raised and the money required. Eventually the initial grand plans had to be downsized to meet reality and finally in late September 1957 the hall was officially opened. the RWF memorial was moved to its vicinity two years later.

Here’s the memorial inside the hall to all those fell in WW2.

The hall is still very much in use today and in 2018 had a makeover to mark the 100 anniversary of the end of WW1.

All across the borough memorial were raised in tribute and here’s a few of them:

There’s a lot going on across the country to celebrate and commemorate VE Day and here’s 10 ways you can take part from the safety of your own home. (taken from Chris’ article)

There will be a nationwide two-minute silence at 11am to remember those who lost their lives or lived through the war.

Many of us at Wrexham Council will be taking part. Please take part if you can.

The UK Government has created a useful and fun guide, which includes recipes, games, posters, bunting and other creative activities!

Grab a cup of tea and join the RBL for an 80-minute stream – sharing stories and memories from those who served and sacrificed during the war, as well as recognising the difficulties people are experiencing today.

Learn to Lindy Hop with English Heritage’s live dance tutorial. Nancy Hitzig will help you get the hang of this popular wartime craze. Sign up now!

Give yourself a Second World War-inspired makeover with English Heritage’s online tutorial!

Listen to Churchill’s original address to the nation, which is being broadcast on the BBC at 3pm on Friday. Raise a glass or a cuppa to mark the occasion!

The IWM Victory Hub features fascinating content about the events of the summer of 1945 and beyond – including personal recollections of VE Day from people who were there.

Watch live on YouTube, as Dan Snow takes us through events as they happened in 1945.

Her Majesty the Queen will address the nation at 9pm – the exact moment her father, King George VI, gave a radio address in 1945.

Join your neighbours from your doorstep to take part in the national singalong of Dame Vera Lynn’s ‘We’ll Meet Again.’

Read the most up-to-date information about Covid-19.