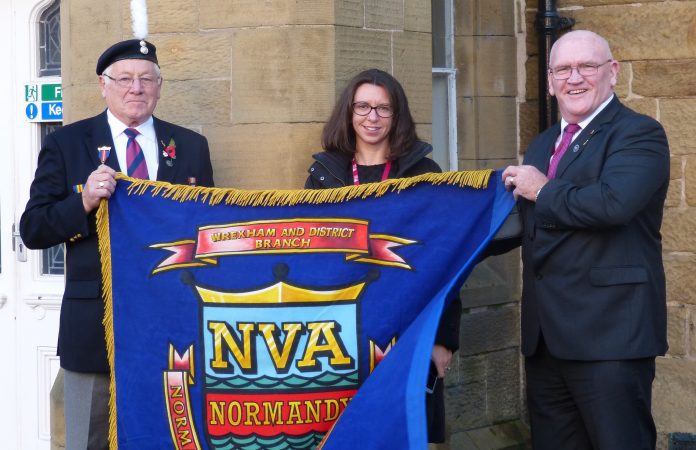 A standard representing the veterans of the D-Day landings will soon be preserved.

The standard for Wrexham’s Normandy Veterans Association was handed over by bearer Anthony Owens to Wrexham Museum earlier this week.

The standard is one of four – along with those for the Eighth Army, Burma Star and Korean Veterans Associations – which were the subject of a successful crowdfunding campaign in 2016 to ensure their preservation and permanent display at the Guildhall.

It will now go to the People’s History Museum, Manchester, for preservation, mounting and framing in preparation for its permanent display in the Council Chamber.

Cllr David Griffiths, Armed Forces Champion for Wrexham Council, said: “I’m very pleased that the Normandy Veterans Association presented their standard for preservation. This means that all four standards are now being safeguarded, and will soon take pride of place at the Guildhall.

“I’d like to thank the representatives of all those veterans’ associations who have worked with us throughout this process, and for entrusting us with the standards – they bear incredible significance for the associations and for the people of Wrexham in general, and their restoration and new presentation will do them justice.”