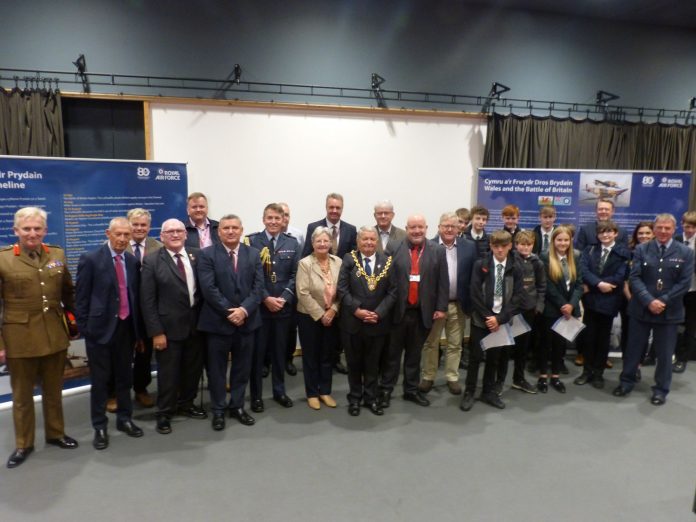 The story of Wales and the Battle of Britain has been unveiled at Tŷ Pawb this afternoon.

The Battle of Britain took place over the skies of the UK between 10 July and 31 October 1940 and involved 2,947 Aircrew including Pilots, Observers, Air Gunners and Wireless Operators. 544 were killed in action and aircrafts involved included the iconic Spitfire, Hurricane, Blenheim, Beaufighter, Defiant and Gladiator.

Visitors to the exhibition will learn about the importance of Welsh bases such as RAF Hawarden which trained Spitfire Pilots. It also tells of the 68 Welsh aircrew that fought and the 17 Welsh pilots who were killed in action during the battle and of the price paid by Welsh cities like Swansea who suffered terrible losses during the German bombing raids.

Cllr Beverley Parry Jones, Armed Forces Champion, said, “This is a particularly interesting exhibition which shows how Wales, including aircrew from Wrexham, contributed to this Battle which was ultimately victorious for Britain and prevented an invasion by Nazi forces.

“It’s also very timely as Wrexham celebrates Wales’ National Armed Forces Day on the 18 June and many visitors to the area will be able to visit and enjoy the exhibition as part of the commemorations and celebrations taking place.”

Air Commodore Adrian Williams, Air Officer Wales, who opened the exhibition said, “I’m delighted that, following on from the official opening of the Wales and the Battle of Britain 80th Anniversary Exhibition in Cardiff, the exhibition is now touring Wales and will has opened in Wrexham.

“The Battle of Britain, the largest air battle ever recorded, was one of the most pivotal and iconic moments in the history of this country. It marked a turning point of the Second World War when Britain stood alone against Hitler’s seemingly unstoppable military power.

“The exhibition tells a story that will enable Welsh people to come along and find out more about what happened in the skies and on the ground in the Summer of 1940. It details the Welsh aircrew who fought, including a number from Wrexham, telling their stories and heroism to a modern Welsh audience.”

It was originally planned to be launched in 2020 but, had to be postponed due to the pandemic. The Wales and the Battle of Britain Exhibition is a story told from a Welsh perspective, one that has never been told before.

It will be open during normal Tŷ Pawb opening hours until Armed Forces Day on 18 June.