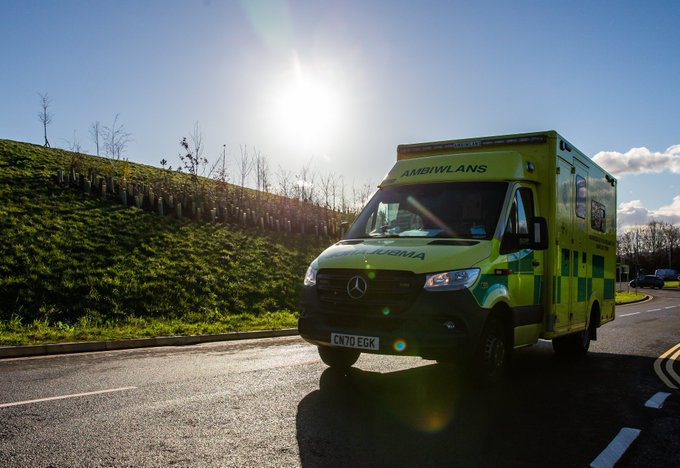 EXTREME pressures on the Welsh Ambulance Service yesterday (19.07.21) meant it had to declare a ‘business continuity incident’.

The Trust has been receiving in the region of 2,000 calls per day via 999 for the last three days.

Immediately life-threatening ‘RED’ calls were also up by almost 30 per cent compared to last Monday.

Call volume, coupled with lengthy delays at hospitals across Wales, meant that demand on the service exceeded its capacity to respond.

As a result, some patients waited many hours for an ambulance.

The Trust put special arrangements in place to manage demand, including asking some patients to make an alternative arrangement, such as making their own way to hospital.

More than a fifth (21 per cent) of 999 calls yesterday were categorised as low acuity ‘GREEN’ calls and were subsequently assessed by NHS 111 Wales.

Here are the some of the other headlines from yesterday –

Director of Operations Lee Brooks said: “It’s very rare that we declare a business continuity incident and it’s not a decision that we take lightly – it’s a sign of a serious situation.

“Yesterday’s heat coupled with the delays at hospitals meant we reached a point in the early evening where demand actually overtook our capacity to respond in a safe and timely way.

“For anyone who had an excessive wait for an ambulance yesterday, we are very sorry for your experience and this is not the service we want to provide.

“While we’re in a more stable position today, we’re still experiencing extreme pressures right across Wales, and we need the public’s help.

“Please only call 999 if a life is on the line – that’s a cardiac arrest, chest pain or breathing difficulties, loss of consciousness, choking or catastrophic bleeding.

“If it’s not a life-threatening emergency, then it’s important that you use of the many alternatives to 999, starting with the symptom checkers on our NHS 111 Wales website as well as your GP, pharmacist and Minor Injuries Unit.”

Lee added his thanks to staff and volunteers across the service.

He added: “Our staff and volunteers in every corner of Wales and in every part of our service are working flat out to deliver the best service we can to people in Wales in very difficult conditions.

“I’d like to extend a huge thank you to colleagues for the immense collective effort.”