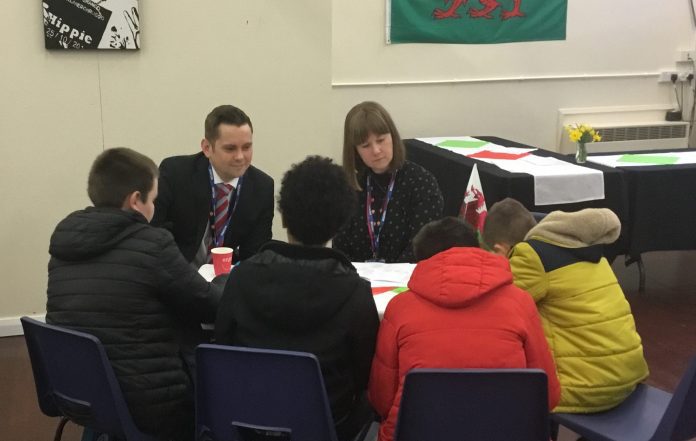 The Welsh language plays an increasingly significant role in the workplace in Wales, with employers placing more and more importance on Welsh language skills when looking for new employees.

Children from four different Wrexham primary schools had the chance to speak to employees from across North Wales for a Welsh in the Workplace day at Ysgol y Grango, Rhosllanerchrugog.

The schools taking part in the event were piloting an initiative jointly planned by Wrexham County Borough Council, Careers Wales and a representative from the schools to support Wrexham’s Welsh in Education Strategic Plan (WESP).

The pupils attending had the chance to speak with workers from organisations including:

The speed-networking event saw individual groups of pupils spend 10-minute sessions with each group of employees, and quiz them on details such as their day-to-day work, how much they use Welsh during their working day and the sort of skills and qualifications needed to fulfil their role.

Cllr Phil Wynn, Lead Member for Education, said: “As part our Welsh Education Strategic Plan (WESP), we want to do everything we can to encourage more people to learn Welsh – be that through traditional education, or other wider channels outside of the classroom setting.

“But as well as teaching pupils Welsh, we also want to show them how learning Welsh can benefit them later in life and can open doors in the workplace.

“With that in mind we wanted to give them the chance to speak to people who use Welsh in their day-to-day work and give them an insight into how bilingualism can be a real benefit when it comes to paid employment.

“I’d like to thank everyone who took part in the day’s event, schools and employers alike.”

Lesley Lloyd, Business Engagement Adviser with Careers Wales, said: “This style of workshop will help young people to develop their communication and listening skills, and give them a valuable insight into different job roles and career prospects that require Welsh language skills.”