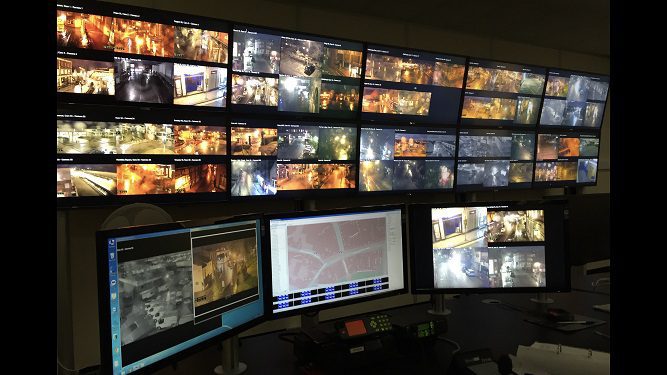 The team has reached this impressive figure by operating and monitoring over 80 cameras positioned in and around Wrexham.

“It helps us to do our job”

Inspector Paul Wycherley, North Wales Police said: “Wrexham’s CCTV helps us do our job every day. We have the live feeds on our desktop computers, we are always connected and have two dedicated town centre officers and four PCSOs who are all connected to the CCTV.

“In the last few weeks alone, CCTV has helped us to locate missing people, drink drivers and make arrests after a large public disorder incident on High Street. The quality of the staff in CCTV control are what makes the real difference, they are of a very high calibre and are well equipped and well trained.”

Two males arrested for theft in Wrexham town center after returning to the scene of their earlier crime. This shows how the partnership between NWP, Crimelink and CCTV in Wrexham works well. #partnership in action. #Wrexham

Since the team was set up in 1996, it has assisted in over 30,000 arrests. And, not only has it assisted in these arrests but, since the introduction of the CCTV in the town centre together with the development of the town centre police team, crime in the first year of operation reduced by over 56%! This resulted in a national award for the team in 1999.

The partnership has grown from strength to strength with the CCTV team working in partnership with local police officers to help monitor large events, like the recent Stereophonics gig, to football matches as well as the towns night time economy.

Cllr Hugh Jones, Lead Member for Communities, Partnerships, Public Protection and Community Safety said, “We are lucky to have such a dedicated CCTV team based in Wrexham County Borough. It is instrumental in assisting partner organisations to make arrests and keep Wrexham streets safe. CCTV and incident response work hand in hand and have been exceptionally successful in reducing and deterring crime in the county borough.”

CCTV can help reduce the fear of crime as well as make people feel safe. They are also a great source of live information. You can follow their Twitter account (@TCCWcmCCTVWxm) for traffic updates, large events, public safety and crime prevention information.

Nice to see people out and about enjoying the Monday Market in the Sunshine. @cbswrecsam @wrexhamcbc @wrexham pic.twitter.com/a2cTBjyEbR

The team, made up of seven members of staff, also monitor alarms for all council buildings and run 24 hours a day seven days a week.

Take a look at the frequently asked questions