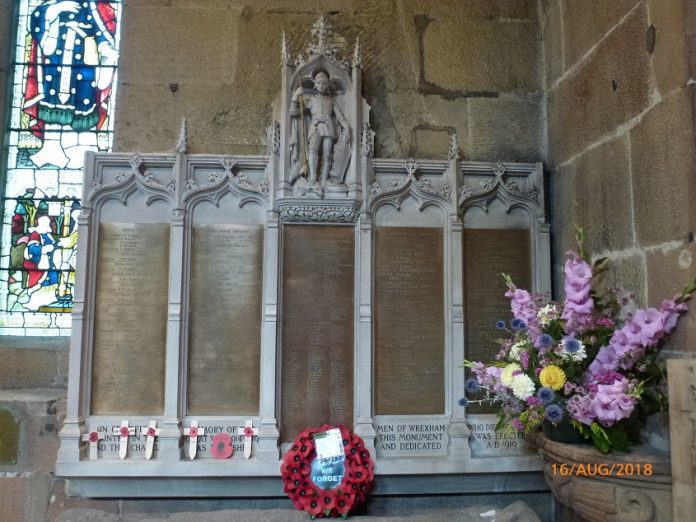 At roughly 10.30 a.m. on 11th November 1918, the news reached Wrexham that the guns would fall silent at 11 o’clock – officially the fighting would finally draw to an end. In Wrexham a factory hooter alerted the local populace that important news was imminent. Soon lorries full of celebrating munitions workers were parading through the town and people gathered in the High Street to hear an official announcement by the mayor from the balcony of the Wynnstay Arms Hotel. It was a time of mixed and raw emotions: relief and joy at an end to the fighting; sadness and grief at the thought of those who had been killed.

Like other communities across the UK, Wrexham has planned a series of events to commemorate the centenary of the signing of the Armistice between the Allies and Germany at Compiegne, northern France, on 11th November 1918.

• A three-venue pop-up display spread across Wrexham town centre at the Memorial Hall, the St. Giles Parish Church and Wrexham Library focusing on the stories of local individuals who were killed while serving in the armed forces and the auxiliary forces during the First World War.

• The fourth part of the Wrexham Remembers Them display will be on show in the main gallery at Wrexham Museum where visitors will be able to view medals and memorials of local soldiers, sailors and airmen.

• The display is on show across the four venues from November 3rd. There is also a free souvenir leaflet accompanying the display.

• Wrexham Remembers Them is based on the research carried out by the Friends of Wrexham Museums Roll of Honour Project, which was organized by well-respected local historian, Alister Williams. The display and leaflet have been supported by the Armed Forces Covenant Fund Trust.

In addition as part of the Armistice Centenary Commemorations, a new permanent display at the Memorial Hall highlights Wrexham’s links to the armed forces over the past two centuries and tells the story of the nearby memorials to the dead of the First and Second World Wars.

Councillor David Griffiths said “Each year on November 11th we remember those who have been killed during the many wars this country has faced over the past century. This year is especially poignant being 100 years on from the Armistice which ended the slaughter of the First World War.

The Wrexham Remembers Them display is a rare opportunity to put a face to some of the names engraved on our local war memorials and discover the stories of these brave individuals.

The Council, community councils and local organizations have come together to stage a fitting tribute to all those who were killed in these wars. I would like to acknowledge the support of the Armed Forces Covenant Fund Trust in making these commemorative events possible.”

The Wrexham Remembers Them display opens on November 3rd.