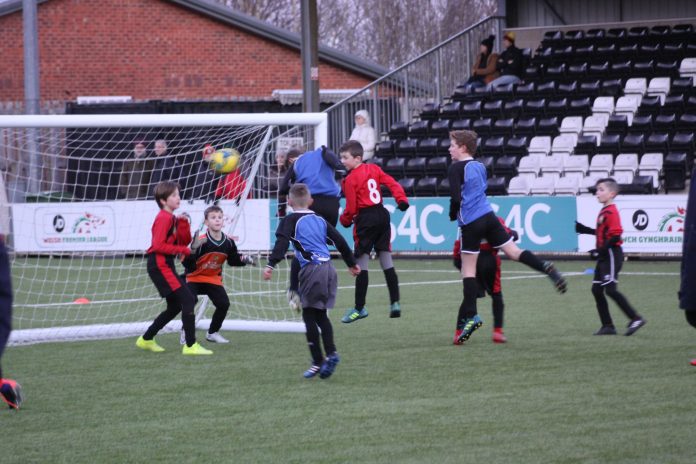 Primary School Football Tournaments organised by the Active Wrexham Active Young People Team took place at The Rock ground, the home grounds of Cefn Druids AFC, in the build-up to a Welsh Under-18s Schoolboys fixture against the Republic of Ireland.

Two teams from each tournament qualified to take part in the finals, which took place on the evening of the Welsh Schoolboys game.

In the Year 3 & 4 tournament, Cefn Mawr defeated Maes Y Llan and in the Year 5 & 6 tournament, Penycae were the winners against Maes Y Mynydd.

Pupils were then invited to stay to watch the Under 18s schoolboy fixture, which was won 2-1 by the Republic of Ireland. A presentation took place on the pitch at half time, during which the winning teams received their trophies.

John Mann, Chairman of the Welsh Schools FA, said: “It was great to see so many schools taking part in the finals and enjoying themselves on the evening of the game. We are definitely looking to do more work with schools in the Wrexham area in the future.

“We are grateful to Cefn Druids for hosting the game. It was a fantastic turnout and there was a real sense of community with so many children and parents in attendance.”

Tudor Jones of Cefn Druids and the Welsh Schoolboys Liaison Officer for the game said: “We have a good working relationship with the staff from Active Wrexham and we were thrilled to see so many school pupils using the facility in the tournaments in the lead up to the game, and also in the finals on the evening. It was a great event, and we saw fantastic attendance on the evening of the game.

I’d just like to congratulate the winners Cefn Mawr and Penycae, as well as all other schools from the local area who took part. We hope to see them all again at tournaments and fixtures in the near future.”