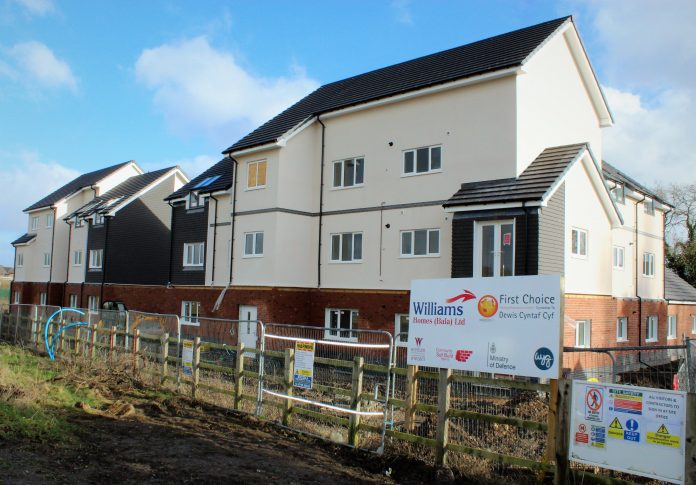 Ex-service personnel from the Armed Forces will soon be moving into homes they helped to build, thanks to an innovative new housing development.

Tŷ Ryan, on Croesnewydd Road in Wrexham, features 16 apartments and is due to receive its first tenants once the building work is completed in March.

During the construction, ex-service personnel were given the opportunity to get involved with the building work and gain valuable trade skills and qualifications.

8 ex-service personnel successfully took part and have now been offered apartments at the scheme.

This is the first project of its type to take place in Wales.

Tŷ Ryan has been developed thanks to a successful partnership between Wrexham Council, who supplied the land, First Choice Housing Association, who managed the construction of the scheme, and the Community Self-Build Agency (CBSA) who mentored the self-builders during the construction phase.

The construction itself is being carried out by Williams Homes Bala.

A guided tour of the construction site was arranged recently for a small group which included Lead Member for Housing, Cllr David Griffiths.

Cllr Griffiths said: “I’ve been very impressed with what I’ve seen today and with the scheme as a whole. We’re developing good quality modern housing for some of those who need it the most. Many of the ex-service personnel who will be living here will have come from difficult situations including homelessness.

“Since we signed the Armed Forces Covenant in 2013, Wrexham Council has worked hard to strengthen our links with the armed forces and I think the success of this scheme and how it’s been able to benefit those involved through training, qualifications and support for employment is evidence of our commitment to this.”

Local Member for Brynyffynnon, Cllr Phil Wynn, said: “New housing schemes such as this one have a vital role to play in tackling the housing shortage. I’m delighted that we’ve been able to work so successfully in partnership with a number or organisations to develop a scheme that is going to make a real difference to housing in the local area.”

Tŷ Ryan has been funded through the Ministry of Defence Veterans Accommodation Fund, created from the Libor fund. This is a grant to help ex-forces personnel access housing and support services after leaving the armed forces. A total of £2.263m was allocated to schemes in Wrexham.

Ken Hames from the Community Self-Build Agency (CSBA), said: “On behalf of the CSBA, we would like to thank everybody who has managed to bring this challenge to fruition.

“One of the pillars of the scheme is that it generates sustainable community, particularly in the light of a self-build strategy that provides transformation for ex-service personnel.

“The self-builders we’ve worked with on the project have put enormous commitment into engaging with us and being professional and hard working on site and we are very proud of them. It is very rewarding to see the project now coming together and we are all looking forward to seeing them moving into their new homes.”

Richard Lloyd, Director of Operations at First Choice Housing, said: “We’ve been proud to work alongside our partners at Wrexham Council and the Community Self Build Agency on such an innovative and forward thinking project.

“I’m very pleased with the progress on site and excited that we have 8 self-builders due to take up their accommodation in March with another on the waiting list for a suitable apartment.

We are accepting applications from all ex-forces personnel so I would urge anyone who wishes to apply for an apartment to get in touch.”

How long will it take?

Housing is available for: