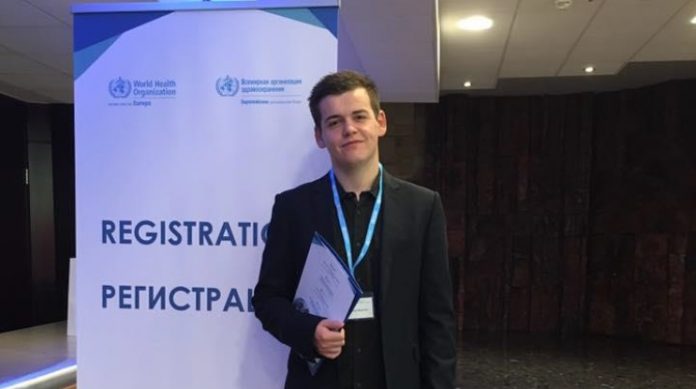 A young man from Wrexham who grew up in the care system had the chance to stress the importance of care and the strength of those who’ve lived in the care system to an audience of international experts – including the Greek Prime Minister.

Tom Blackwell, a 20-year-old who lives in Wrexham, worked with the World Health Organisation (WHO) this summer to put across his views on how people can bounce back from traumatic pasts and the resulting challenges they are often left to face.

A short documentary was made of Tom’s experiences, explaining his life story raising awareness of child poverty and the need to focus on the importance of human resilience in health work, helping people to bounce back stronger from traumatic or difficult experiences or backgrounds.

During his time at the WHO summit, the documentary was shown in the main committee meeting in front of influential European leaders, including the Greek Prime Minister Alexis Tsipras.

Tom shot from local politics to the international stage after he was seen assisting a Public Health Wales consultation in ensuring young people had the chance to put their views forward on health.

Tom began in his role in Senedd yr Ifanc earlier this year, initially joining to support a friend.

He said: “I’ve only been a member for five months. I started out with the goal of supporting a young disabled friend who’d wanted to join.

“After three meetings I realised my friend was never going to come, but carried on with it myself and came to really enjoy it.”

In a matter of weeks at Senedd yr Ifanc, Tom was selected to work on a consultation run by Public Health Wales (PHW), giving his view on how statistics and data gathered by the health body could be better and more sensitively presented to make it more accessible to young people.

“I went down to Cardiff with PHW as they wanted to do a consultation with young people – it was very in-depth and there was nothing really in there to make it more accessible to a younger audience.

“But PHW wanted all the information they could get and so they wanted to ensure it was better presented to kids that are disabled, or are from tough backgrounds.

“Because I’ve always been very politically aware, I wanted to make sure I asked as many questions and suggested as many improvements as I could, and they were very impressed by that.“

“They wanted my story”

While at the Cardiff conference, Tom’s work and the help he provided to PHW set him in the sights of the World Health Organisation.

“A director of PHW was present during one of the meetings for the consultation, and I was put forward to go and work with the World Health Organisation.

“WHO flew over and filmed a documentary of my experiences in care and my life here in Wrexham living independently since age 17; they took shots of me mountain biking around Erddig, and requested a clip of local team Wrexham FC. It was a really nice interview, they wanted to know all of me, not just the dark times .

“And they wanted my story, as well – they didn’t just want my views. They wanted to hear from someone who’d lived through a difficult background. That certainly placed more of a responsibility on me – I wanted to get my experiences across.”

He also had the opportunity to visit a WHO conference in Budapest, putting forward his views on human resilience during a debate with an Italian professor and a Polish doctor.

“Honoured to have been given the opportunity”

He added: “I’m honoured to have been given the opportunity. As much as I was grateful and pleased to have been asked, plenty of people have been in my position before, who unfortunately struggle to no ends in life.

“During my time in Hungary I was given the opportunity to speak at a ministerial lunch amongst all the officials present.

“The points that raised most attention were the eight different care homes I had lived in, and the tens – perhaps more than one-hundred – of children I had lived with.

“I can count on one hand how many are happy and successful today, but lose count of those who are under-age parents, institutionalised, imprisoned or, sadly, no longer with us.”

“When you’re working with groups like Public Health Wales and the World Health Organisation you can’t pull any punches, but I’m so grateful to be in a position to speak of my past.

“I feel honour-bound to fight for other children out there coming through the care system.”

Cllr William Baldwin, Lead Member for Children, said: “I’m very pleased to see someone like Tom, who’s grown up in the care system attract the attention of the World Health Organisation.

“The expertise and experiences of young people like Tom can’t be undervalued, but it’s especially good to see that he’s been recognised by both national and international agencies for what he has to say about care, and the experiences people in care have to deal with.

“I congratulate Tom on his efforts, and wish him the best of luck in his studies.”