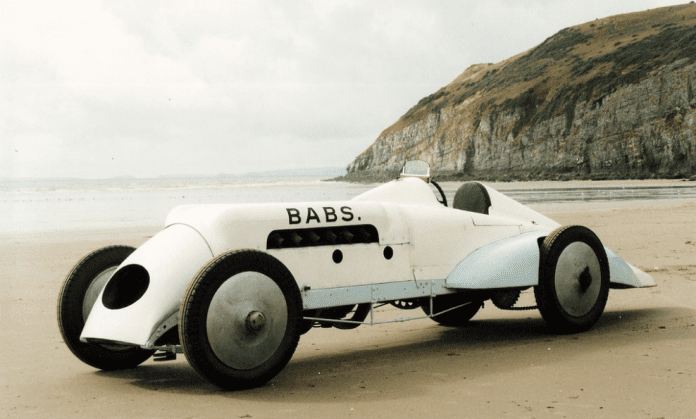 There are some great Wrexham stories…

We love both hearing them and telling them – and quite frankly, the more unbelievable the better 🙂

And the tale of the affectionately named ‘Babs’ and J.G. ‘Daredevil’ Parry Thomas is probably the most unbelievable and the most un-Wrexham like thing you’ll ever hear…

Babs is the name of a racing car which was designed, built and driven by John Godfrey Parry Thomas of Wrexham.

Babs and Parry Thomas would go on to become local legends (for many reasons that we’ll get to). As a starting point, we’ll look at J.G. Parry Thomas and what led him to create Wrexham’s very own Lightning McQueen.

Parry Thomas worked as an aero-engine designer during the First World War. It’s fair to say he was a leader in this up-and-coming industry.

In 1923, he decided to enter the exciting world of motor racing and he became a professional racing driver at Brooklands racing circuit in Surrey.

He was soon given the nickname ‘Daredevil’ as his talent began to show. His ultimate goal was to break the land speed record, but this was always going to be difficult for him to accomplish…

This was because Daredevil didn’t have as much money at his disposal as his rivals – so it’s a credit to himself that he was able to compete with them.

It was his talent as a designer, engineer and racing driver that kept him competitive…a man of many talents.

In 1924, Daredevil bought himself a Higham special sports car as he believed it to have the potential to be the fastest car on earth.

He bought the car from the estate of a racing driver who’d been killed in the Italian Grand Prix – a reminder of the dangers that existed.

Daredevil quickly set about creating the fastest car alive. He made several mechanical changes to the vehicle and painted it white.

The car was then christened Babs after his favourite niece 🙂

Into the history books

On April 27, 1926, Daredevil and Babs made history by breaking the world land speed record when Babs raced across the Pendine Sands in Carmarthenshire at a speed of 169mph…a momentous achievement!

But Daredevil felt he could better this still…

After a night of tinkering with Babs, on the following day they returned and recorded a flabbergasting 171mph.

The Wrexhamite made his dreams come true 🙂

A deadly set of events

Daredevil wanted to take his title back and returned to Pendine Sands. The weather halted his efforts for two days, then eventually on March 1, 1927, he was able to ride Babs…

Daredevil knew he was pushing himself and Babs to the limit, but his will was so strong, he couldn’t resist attempting another shot at glory.

Then, on his sixth attempt of the day, tragedy struck…Babs flipped and cart wheeled three times before crashing…

J.G. ‘Daredevil’ Parry Thomas was killed in the process.

Onlookers were horrified, but many claim they believe Daredevil and Babs to have been travelling at over 180mph before the accident. The official speed was never recorded.

In 1967, Owen Wyn Owen, an engineer at Bangor University, was keen to bring Babs back to life. He sought permission to dig up the remains, which he achieved in 1969.

Owen wanted to get Babs as close to her original condition as possible…it was a long and careful process. In the instances that it couldn’t be done, he used authentic replacements.

After a couple of hiccups, Babs was eventually restored to full working order.

She now remains the star attraction at the Museum of Speed on Pendine Sands and various classic car rallies around Britain.

Babs made her way back to her creator’s hometown on April 1, 2012 and was displayed outside Wrexham Museum for six hours. Pictures of this can be found on the council website.

You don’t necessarily think of land speed records and Wrexham in the same sentence, but a local visionary made this possible 🙂