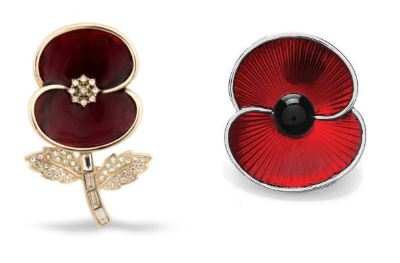 If you’re thinking of supporting the armed forces by buying a poppy this year then please make sure it’s from a reliable source – The Royal British Legion’s (RBL) online Poppy Shop, or from one of their corporate partners.

The RBL has registered its rights for the poppy goods to prevent such counterfeiting.

“Fake poppy merchandise – what to look for”

You should look out for counterfeit goods that are in the shape of or bearing the image of the RBL’s two petal red poppy . The RBL have registered their rights for the poppy goods to prevent such counterfeiting.

To help you beat the fraudsters, here are the top tips to avoid buying fake poppy merchandise online:

• be a ‘responsible buyer’ – buy from official channels and The Royal British Legion’s corporate partners. You can check them out here (https://www.britishlegion.org.uk/get-involved/partner-with-us/our-partners/)

• avoid cheaper priced products. If the price is too good to be true, it usually is

Cllr David Griffiths, Armed Forces Champion, said: “It’s a very sad fact that people will try to make money out of other people’s good causes. The annual Poppy Appeal is no exception and I hope every penny that people donate to the armed forces, their families and veterans by buying a poppy finds its way into the hands of the Royal British Legion and not a fraudster.”

Call Crimestoppers on 0800 555111 or report it online here if you spot anyone selling what you believe to be fake poppy products.