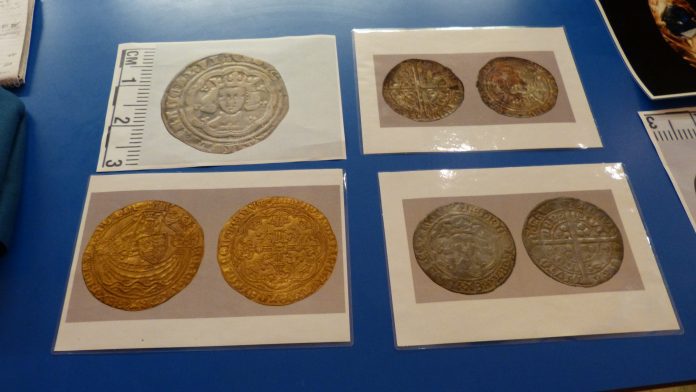 Primary school pupils had the chance to see their local history up close when a touring museum exhibition visited their school.

The tour is part of Wrexham Museum’s Buried in the Borderlands project and is funded by the Heritage Lottery Fund’s Saving Treasures: Telling Stories project, in collaboration with the National Museum of Wales.

The coins date back to the 15th century, and were discovered buried in the Whitewell area by metal detectorists, along with a gold and sapphire ring.

The coins date from the reign of Edward I right up to Edward IV. The hoard was deliberately buried in about 1465 – although it is not known who buried them, or why.

The visit by Wrexham Museum to the school follows months of works by pupils at Bronington VAP, who carried out a school project on the coins earlier in the academic year, and also wrote a poem based on the find.

Angela Birkinshaw, Headteacher at Bronington Voluntary Aided Primary School, said: “I was incredibly pleased that we were able to get the coins to the school, and I’m very grateful to Wrexham Museum and everyone else involved for ensuring the children had the chance to see the coins close-up.

“Given the fact that the school isn’t far from where the coins were discovered, it was so important to us that the pupils had the chance to be made aware of the history of their immediate area, and in their own school.

Mrs Birkinshaw added: “I’m also glad that representatives from Wrexham Museum were on hand to give the children an idea of just how significant the hoard is.

“I should add that the children hugely enjoyed the day and the chance to see the coins close up – it’s not every day that they get to see such important historical artefacts.”