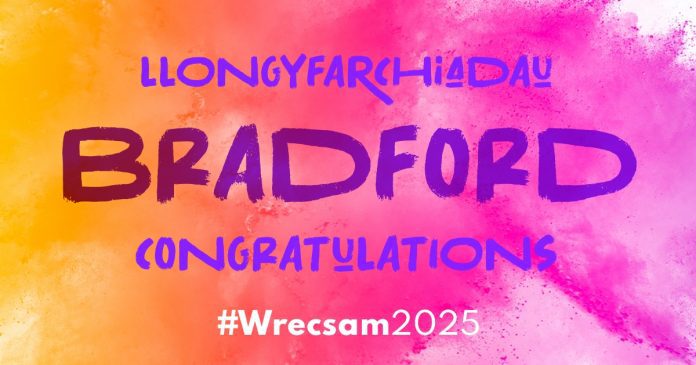 We would like firstly to congratulate Bradford in winning the title as we know how much hard work is involved and we’re sure that Bradford will make a great success of their year as UK City of Culture. We look forward to visiting in 2025.

As a county, and as a community, this competition has brought us all closer together and helped us realise just how special Wrexham is. We all have different backgrounds and different stories, but once we start joining the dots, we’re a strong, supportive and resilient community who look out and support each other.

The work and achievements of the past few months has put us on a new trajectory that we aim to build upon over the coming years, creating an even more thriving community and generating opportunities in the process.

-Committing to a significant event programme in 2023 and 2025

Joanna Swash, CEO of Moneypenny and chair of Wrecsam City of Culture steering group said: “We’ve achieved so much in this short amount of time and have witnessed an outpouring of community and business support for the bid. “We’ve shown just how much drive and potential that Wrexham has to offer and we have a strong platform to build on this further in terms of culture, skills and innovation in our county.”

Cllr Mark Pritchard, Leader of Wrexham County Borough Council said: “ It has been a great to see our many achievements, community engagement and support for the bid, but for now, we will no longer proceed in the competition and wish Bradford the best of luck in their year as UK City of Culture in 2025 . “We have now achieved city status for Wrexham and we look forward to realising the benefits that this will bring.”

Chair of Wrexham County Borough Council City of Culture steering group Cllr Hugh Jones said: “As the only region on the shortlist from Wales, we flew the flag for our country as well as Wrexham. Achieving shortlist status has helped us raise the profile of Wrexham, but it’s also sparked momentum and given us a platform to build on for future.”

Ian Bancroft, Chief Executive of Wrexham County Borough Council, said: “We have a much better understanding of what Wrexham culture is, and what culture means to Wrexham. “Culture plays a part in people’s daily lives and has a capacity to change and improve our surroundings and wellbeing. “We need to ensure that the links made during this competition as well as the learnings from it are not lost, and head towards a future where culture plays a key role in our planning and decision making for the  benefit of our county.”

Although we have missed out on becoming UK City of Culture hosts in 2025, there’s still so much to look forward to.