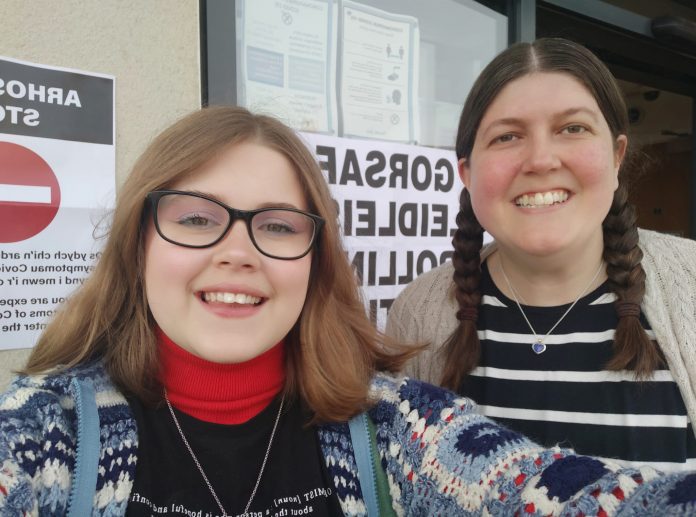 It’s been a few weeks since the local elections, but you may remember Scarlet and Katie who were voting for the first time.

Now they have been able to cast their votes, we find out how it felt to finally put the cross in the box!

WCBC: “Hi both, you’re finally voters! How did it feel to cast your vote for the first time in these local elections?”

Katie: “It felt amazing to be able to finally vote for the first time. As someone who has been a keen activist and campaigner and taken a particular interest in politics since they were 11, I’ve been waiting to be eligible to vote for a while and it felt really nice to be able to have a say in who my local councillor would be!”

Scarlett: “It felt really empowering and, whilst at first it felt a little daunting, I realised that I had nothing to be worried about. It was also amazing to see so many young people at the polling station; it added to the atmosphere of hopefulness as well as action.”

WCBC: “A number of the wards in Wrexham were really close – just a few votes between candidates – what do you think this says about the importance of voting?”

Scarlett: “It truly demonstrates that every vote counts. It may seem that your individual vote does not have an impact, but the close results show that it is important!”

Katie: “I’ll say it once and I’ll say it again: people’s votes matter. A handful of votes could be the difference between who’s making decisions over us, who represents us, which policies are prioritised, and I really hope that this election has proved this to people.”

WCBC: “Did you find the process of voting easy?”

Katie: “It was really simple in my opinion. I knew what all of my candidates stood for, where my polling station was and all the staff at the polling station were so lovely and made sure I knew exactly how to cast my vote.”

Scarlett: “I found the process really simple to follow, relaxed, and quick. Everything at the polling station was laid out easily and the staff were extremely helpful; they knew it was my first time ever voting and guided me through the process.”

WCBC: “What advice would you give to a first time voter on polling day?”

Scarlett: “I think my only advice would be to not hesitate to vote! It honestly is a great experience when you vote and to feel like you have made a difference. Voting is something I would definitely encourage, especially as it is such a simple process. As well as that, if you do have any questions, just ask friends, family, or those at the polling station – there are always people willing and eager to help.”

Katie: “I’d tell any first time voter on polling day to trust your instincts and your beliefs and to know what your candidates each stand for and what they will do to represent you. It doesn’t matter who your friends or parents are voting for, what matters is who you want to vote for, so follow through with that. Also make sure you’re aware of what election this is – a local councillor has different powers to a Member of the Senedd or an Member of Parliament, so make sure that you’ve looked up what each candidate has planned for issues within their powers, and not what is beyond them.”

WCBC: “And finally, how did it feel waiting for the results to come in?”

Scarlett: “I was really excited! I was eager to see the results and see if my chosen candidate had succeeded. The entire voting process has made me want to become more engaged with politics to a level I had never experienced before. I think it’s because I felt like I was an important part of something larger; something that would make a difference to the community.”

Katie: “I felt a weird sense of adrenaline and anxiety as the results came in. I’m a politics student so I love watching the votes come in all around the country and have done for many years now. For me, watching the results isn’t about whether who I’ve voted for has won or lost, but about discovering who represents me and who will be making the decisions for and about me; it’s a really important role and I find it so exciting reading the results.”