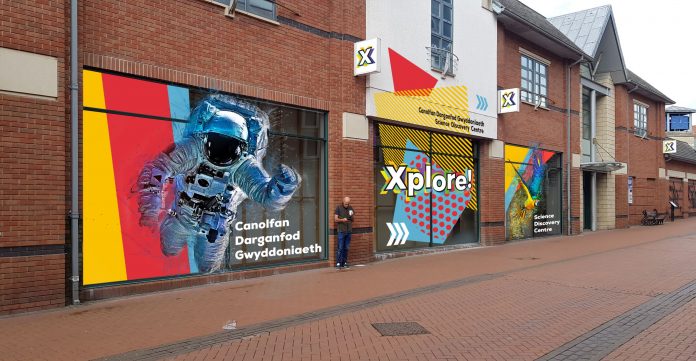 The home of science in North Wales officially has a new identity as Techniquest Glyndŵr announces their new look and name to coincide with their multi-million pound move to Wrexham town centre.

Following months of consultation with thousands of people across North Wales and the North-West, the new name has now been revealed as ‘Xplore!’

During the research phase, several groups had their say from across the region and included many who aren’t engaged with STEM (Science, Technology, Engineering & Maths) subjects.

A list of over 200 names was whittled down to just three during the latter stages of 2019 with the general public voting on their preference, with ‘Xplore!’ the overwhelming favourite across several demographics.

In 2019 the decision was made to move away from the ‘Techniquest’ brand having established the centre in Wrexham with the support of their Cardiff counterpart. They now have the opportunity to develop their identity having worked in partnership with Techniquest since opening in 2003.

The organisation has worked with North Wales based ‘Worldspan Creative’ to develop the exciting new branding and logo.

North Wales Science – the official name of the educational charity – will continue to trade as Techniquest Glyndŵr whilst at the current site on the Plas Coch campus of Wrexham Glyndŵr University but will become ‘Xplore!’ as soon as the move to Henblas Street comes later on in 2020.

This is also an opportunity for Wrexham Glyndŵr University to further enhance their presence within the community, with North Wales Science being an important part of the wider University group and an opportunity to play their part in the regeneration of Wrexham town centre.

In June 2019, Techniquest Glyndŵr confirmed their move to Wrexham town centre and work began on site in December. The branding is set to run throughout the new location and play an intrinsic part in both the exterior and interior design of the new Science Discovery Centre to create one of the town’s most interesting and intriguing attractions.

The property on Henblas Street has been vacant since 2011 having previously been used for retail, but it will now breathe new life into the centre of Wrexham.

The Inspiring Science Fund scheme is co-funded by the Department for Business, Energy & Industrial Strategy (BEIS), UK Research and Innovation (UKRI) and Wellcome.

We’re really pleased to be able to reveal our new name and branding to the general public, who have had a huge part to play in this process. We haven’t just taken the advice of our visitors and the community, but each step has been co-created with them.

This ties in perfectly with our move to Henblas Street and we can’t wait for everything to piece together with work on our new home beginning last month. 2020 is set to be our biggest year yet with lots of exciting changes not only for our organisation but the town centre community.

It’s been a big process and we’re really happy with the result and particularly the way in which the public have responded when consulting with different groups in the area.

This change has allowed us to develop our identity and further communicate our values. Those values weave through our branding as the curious, diverse and community-orientated organisation that we strive to be. It was vital that our new identity was rooted in our beliefs and we feel the colourful and exciting branding reflects the inclusive nature of our work.

It won’t be long until our new name will be seen within the heart of Wrexham, so keep an eye out!

“Techniquest Glyndwr has had an incredible journey so far and it’s fantastic to be a part of their continued growth. The new centre is at the heart of our town and will help to drive regeneration in the area, educating people in STEM – something Wrexham Glyndwr excels at – and bringing science to life. We’re really excited to see Xplore! take shape and look forward to the launch later this year.”