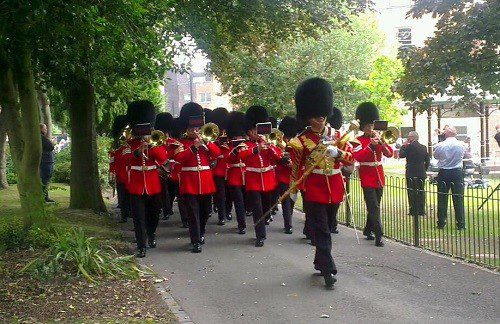 Soldiers are set to march through the town in September as the Welsh Guards exercise their right to hold a Freedom March!

They’ll be here on Tuesday, September 17 with their marching band, bayonets fixed and standards flying 🙂

The Welsh Guards were awarded the Freedom of the County Borough in 2014 at a ceremony held in the town centre. The granting of the Freedom formally recognised the contribution the Welsh Guards have made to the county borough and their relationship with the authority and people of Wrexham.

The date of the march will coincide with a concert to be held at the barracks on the evening of the 17 September and details of this will be released by the organisers, the Army Benevolent Fund.

The March will begin at the Barracks, Hightown, at 11am and will proceed into town via Kingsmills Road, Salop Road, Yorke Street, Chester Street, Lambpit Street,  Queen Street, before entering Queens Square and assembling on Llwyn Isaf Green for 11.30am.

Cllr David Griffiths, Armed Forces Champion, said: “This will be quite a spectacle and I know the people of Wrexham will be pleased to welcome the Welsh Guards back to Wrexham.”