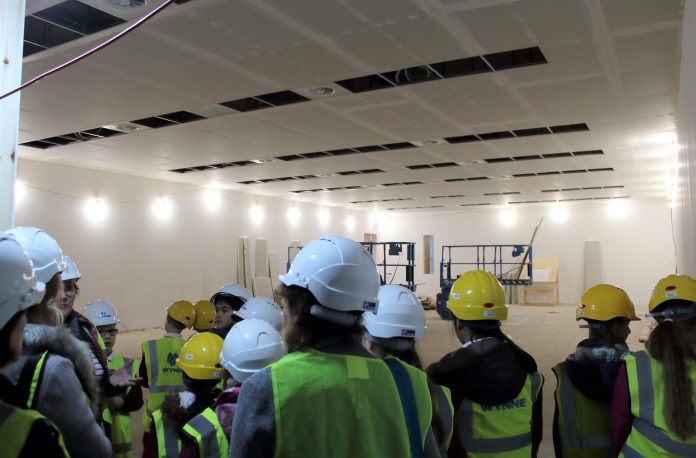 There’s only a few weeks to go until the opening of Tŷ Pawb – Wrexham’s brand new £4.5m markets, community and arts facility which has been funded by the Arts Council Wales, Welsh Government and Wrexham County Borough Council.

But, while most of us will have to wait until the official opening (stick it in your diary – Dydd Llun Pawb on April 2), a group of lucky youngsters have been able to get an exclusive tour of this impressive new facility as the building work reaches the final stages.

Secondary school pupils from St Mary’s school, Ysgol Y Grango and Hafod Y Wern were among the lucky few to get the tour treatment – and we even let the teachers in too!

The rooms are nearly ready

As part of the tour, the children were able to see some of the exciting new spaces which will soon be filled with all kinds of exhibitions, arts and cultural community events.

This included the new market hall, where traders will soon be getting their new stalls ready for action, the huge new performance area and the impressive looking exhibition room, Gallery One, which even has its own climate control to protect the more fragile exhibits!

The children were shown photos and designs for Tŷ Pawb, including some snaps of how it used to look which help to show how much work has been done to convert the old People’s Market into this impressive new building.

There was also something rather unusual to see amongst the concrete and bricks. A traditional shepherds hut! During 2015/16 the gallery commissioned artist Antonia Dewhurst to work with The Caia Park Partnership and Stars Wrexham to design and build a full scale Shepherd’s Hut.

The project enabled young people (16-25) to develop transferrable skills to help them find employment. It’s based on the design of one the typical huts which once would have been dotted all over the fields and farms of rural Wales. The hut will now be used as a workshop/studio space within Tŷ Pawb.

Once the main tour was over, the children from St Mary’s took part in a short workshop where they were able to design their own Shepherds Huts using a range of art materials.

The tour was organised by our team at Oriel Wrexham (soon to be Tŷ Pawb), with support from our contractors, Wynne Construction, who are carrying out the building work on Tŷ Pawb, and The Consortium, who provide stationery and materials for our schools.

They were able to provide the support as a Community Benefit scheme. This is when contractors who work with the council contribute or donate something ‘extra’ which benefits the local community or economy.

Bringing ‘world class’ arts and culture to our doorstep

Deputy Leader of the Council and Lead Member for People – Communities, Partnerships Public Protection and Community Safety, Cllr Hugh Jones, said: “It’s wonderful to see the enthusiasm which is now building up around the opening of this fantastic new facility.

“Getting our local schools and young people involved with arts and culture is going to be an integral part of Tŷ Pawb. All the children who’ve visited have been very excited with what they’ve seen and there will be many more visits like this to come once we are up and running.”

Lead Member for Education, Cllr Phil Wynn, said: “This is a very exciting time for Wrexham and I believe this new facility is going to become an invaluable resource for our local children. It’s bringing world class arts and culture to their doorstep and there is certainly a real buzz building up as we wait for work to be completed.”

Tŷ Pawb opens officially to the public from April 2.